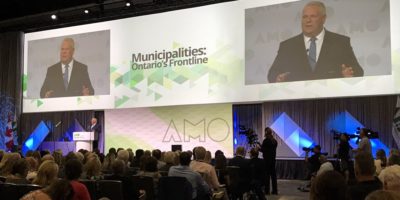 Municipalities will cover more of the health and childcare bill than before, as the Ford Government announced today it is downloading some costs.

Premier Doug Ford made the announcement at the annual Association of Municipalities of Ontario conference, claiming the provincial government just needs to get out cities’ way. “Our government’s relationship with Ontario’s municipalities is incredibly important to us,” said Premier Ford. “As the level of government closest to the people, municipalities know the needs of their communities best. We must work together to put local communities back in the driver’s seat of their own affairs.”

To make up for it, Ford says municipalities will receive transitional funding out of the 2020 provincial budget, so there would be no lapse from services such as public health and child care, as these municipalities are expected to work with the Ontario government in finding further cost-savings over the long term.

Ford went on to detail a Community, Culture and Recreation Stream that could mean for up to a billion dollars in funding for local projects. “Municipalities know how to make every dollar count because they know where it’s needed most,” said Premier Ford. “The province inherited a massive debt and broken systems for health care, education, and social services from the previous government. The solution shouldn’t be imposing one-size-fits-all solutions from Queen’s Park. Rather, we should focus on giving our municipal partners more flexibility with their budgets to protect core services.”

A study from Moody’s Analtyics in late June indicated that, would the Ford Goverment move forward with making cities shoulder more service costs, it would create a 2-billion dollar hit to municipal budgets over the next decade.