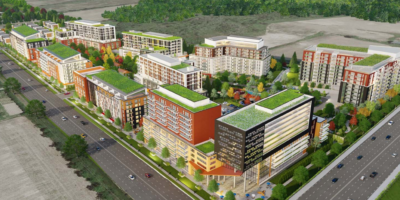 Barrie City Hall got a good look at a proposed neighbourhood at a Monday night virtual open house.

A new development is being proposed for a large swath of land on Barrie’s southern border, at the intersection of Yonge Street and Lockhart Road. The project would consist of several blocks of residential and commercial units. It would cover just over 10 hectares of land and would feature 60 townhouses and four mixed-use residential and commercial buildings, for a total of 1,218 units.

The project was presented as part of a public meeting as the developers behind it are seeking a zoning by-law change that would allow it to move forward. Currently, the land is designated residential and is zoned for General Agricultural Use. The developers are asking the city to change the zoning Neighbourhood Mixed Use. The whole area is earmarked for development as part of the Hewitt’s Secondary Plan, established to help guide some of the annexed lands in Barrie’s south end.

The public meeting for this project allowed residents to weigh in, via Zoom, to air any concerns they may have; only one joined the meeting to voice support for it.

City staff will examine the zoning application and report back to city council in the coming weeks.