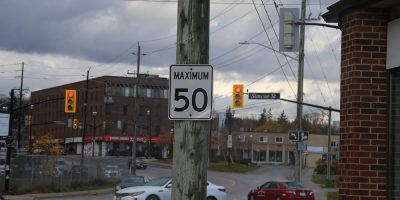 An effort by city councillor Keenan Aylwin to get an across-the-board speed limit reduction of 10 kilometres per hour on city streets came to a screeching halt at Monday’s Barrie council meeting.

Instead, city staff will review the data related to collisions and injuries involving vehicles, including collisions and near-misses, in the streets identified by residents and by members of council as areas of concern.

The purpose would be to determine the streets which require improvements to address safety concerns and providing strategies that could include but are not limited to reducing speed limits. A report would come back to council.

Aylwin explained why he thought an across-the-board speed limit reduction made sense.

“There is evidence that shows that reduced speed can reduce the likelihood of severe injury or death, especially for vulnerable road users, such as pedestrians and cyclists.”

“It’s about identifying problem areas and creating strategies to address them,” he said.

Councillor Gary Harvey said Aylwin’s motion had the best of intentions, but he was very reluctant to support a blanket 10 kilometre per hour reduction.

“Especially after speaking to almost 40 residents through the weekend to get a feel from people to see what their thoughts are, and not one person that I spoke to thought this was a good idea,” said Harvey. “However, almost all of them did think that lowering residential areas was a good idea.”

City staff would create an online survey to poll residents about lowering speed limits and other related questions.

“I think it’s key that we solicit their input on this,” added Harvey.

Councillor Barry Ward said the data needs to include what police thought caused the accident.

“Whether it’s excess speed or driver distraction, somebody is using their cell phone, and I’d like to know. It would be very valuable to get the information on what caused the accident.”

On most Barrie streets the posted speed limit is 50 km/h, though some roads are 60 km/h, and community safety zones are 40 km/h, depending on the time of day.

Final approval on these measures will come to city council at its next meeting on Apr. 26.