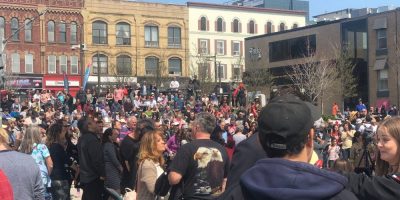 Some citizens have stepped in to try and dissuade anti-mask protestors from gathering in downtown Barrie, given that authorities’ hands are mostly tied on the whole thing. However, city hall may look to the courts for answers.

On Saturday, anti-mask protesters arrived at Meridian Place to find the public square covered with the names of over 100 people who lost their lives to COVID-19, written in chalk along with several other messages of love, acceptance, and the value of mask usage. Despite this, the protest went ahead as planned, complete with a controversial list of speakers.

These anti-protest actions are said to have been the strongest taken to prevent these rallies to date.

What has become a weekly event at Meridian Place has many residents asking, if large gatherings aren’t allowed, why are these rallies permitted to continue and what would it take for the city to step in and stop it? “Number one, we can’t do that. And number two, I don’t think we would,” said Barrie Mayor Jeff Lehman. “There’s a bright line in Canada: politicians don’t tell the police who to arrest or how to do their job. What we do is we make the laws, but the decisions as to how and using what methods of enforcement are made by the police.”

Barrie City Hall issued a statement on Tuesday afternoon, stating it is exploring all avenues to halt these gatherings including possible court action. The City suggests an injunction could be used to restrain the protest organizers, while the gatherings remain subject to police enforcement under provincial regulations.

Following the latest rally, some 15 provincial offenses notices were handed out to protesters. The week before that, eight tickets. The week before that, one. This is demonstrative of the approach taken by Barrie Police thus far. “We are going to continue our graduated approach and, probably, there will be more people charged as these demonstrations continue,” said police spokesperson Peter Leon.

“Moving forward, we do have an operational plan,” Leon continued. “We have been following one since the beginning of these demonstrations and our plan is flexible depending on crowd size and dynamics. There’s a lot of factors that we have to look at.”

“I think it’s fair to say the Barrie Police are concerned, first and foremost, with maintaining order and keeping everybody safe,” added Mayor Lehman. “But they have been escalating their enforcement and I understand they’re maybe not escalating fast enough for many people who are very angry at the protesters’ actions.”

The Executive Director of the Downtown Barrie Business Association (Barrie BIA) says reaction among businesses in the area to these rallies has been mixed. “The Downtown Barrie Business Association has been contacted by many member businesses regarding the ongoing protests that are taking place each Saturday at Meridian Place – both positive and negative,” reads a statement from the Barrie BIA’s Kelly McKenna. “We are in constant communication with our community partners, the Barrie Police and municipal leaders to share our members’ feedback so their voices can be heard.”

While the BIA says there has been positive and negative reaction to the protests, some residents have taken it upon themselves to create petitions calling for an end to these demonstrations. One such petition, with over 1,600 signatures at the time of publication, claims the protests are damaging downtown business and contributing to the spread of COVID-19. The petition calls on Barrie City Council to work with the Barrie Police service to “ensure these events are shut down and that the people breaking the law are properly sanctioned.”

“Education clearly has not worked. It’s time for enforcement,” concludes the petition.