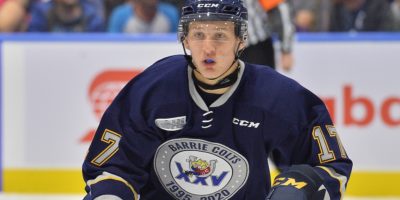 It was nearly a month ago the Barrie Colts traded away several popular veterans at the OHL trade deadline, fired head coach Warren Rychel and were reeling after another lengthy losing streak.

Finding a way to hold on to a playoff spot seemed like a reasonable goal for the young team.

Well, what a difference a few weeks make.

The Colts wake up this morning just two points behind the Sudbury Wolves atop the Central Division standings after rallying for a thrilling 5-4 overtime win over the Mississauga Steelheads, Thursday night, at Sadlon Arena.

After winning just three of their last 18 games since the beginning of December, the new-look Colts (22-21-3-2) have won six of their last seven and earned 13 of a possible 14 points to move a point behind Mississauga and jump right on the heels of the Wolves in the race for top spot in the Central.

Despite going through lengthy eight-game and six-game losing skids over the last two months and a ton of adversity, the Colts aren’t looking to settle with a mere playoff berth.

“That just shows how much character we have,” said rookie defenceman Brandt Clarke, who scored twice in the come-from-behind win against the Steelheads, including the winner at 2:22 of overtime. “We don’t let anything get us down. We had a lot of trades, a lot of new guys, but we gelled really quickly.

“It’s showing for us and we’re just having a good time. It’s fun in the room and everyone’s playing well.”

A Wolves loss in Oshawa on Friday, coupled with a win over Sudbury here Saturday night, could see Barrie move past its division rivals in the standings.

“A month ago we weren’t in that position and in the past 10 games or so it’s completely turned around,” said Colts rookie forward Trey Zagrzebski, whose first OHL goal early in the second sparked a three-goal outburst that saw Barrie erase a 2-0 first-period deficit.

While the trade deadline saw NHL prospects like Tyler Tucker (Flint) and Matej Pekar (Buffalo) moved along with captain Jason Willms, the young team has found a way to rally around one another.

“The trade deadline was huge for us,” Zagrzebski said. “We got some good players in, great guys. I think overall it’s just made our team chemistry better. It’s always a lot of fun in the locker room and coming to the rink. And that’s a big part of it, just being a team together.

“That chemistry is a huge part and just working hard every day.”

Down 4-3 in the third and the Colts shorthanded with Matthew Hill off for tripping, Aidan Brown raced down the right side and slid it under Steelheads netminder Kai Edmonds to tie the game at 8:32.

Brown, who finished with a goal and two assists on the night, was also instrumental in Clarke’s overtime winner.

“Brown made a great play on the backside, outmuscling two of their players and chipping it to (Tyson) Foerster,” said Clarke, who has three goals and four assists in his last three games. “Foerster put a hard, low shot and I got stick position on (Mississauga defenceman) Thomas Harley and just banged it home.”

Former Barrie Colts minor midget AAA star James Hardie, who had a huge night with a goal and three helpers, opened the scoring with Mississauga on the power-play goal at 4:44 of the first and then set up Nick Isaacson’s power-play marker less than four minutes later.

The Colts were outplayed and outshot, 14-5, in a dismal first before Zagrzebski gave the Colts the jolt they needed when he jammed home a feed from Victor Hadfield.

Vierling tied it less than a minute later and Clarke’s first under two minutes later put Barrie on top.

“I just kept going right to the net like I was told every game and it finally came my way and I got it in the back of the net,” Zagrzebski said of his first goal.

The rookie was still sporting a huge grin after the contest and admitted it was a big relief finally getting that first one.

So was Clarke, who was excited for his teammate.

“That was great to see,” he said. “He’s had a lot of close calls and it’s great to see him get his first. Yeah, we were kind of struggling, but that’s what it takes sometimes. You need a good bounce. Hadfield made a good sauce pass, Trey got the goal and then the floodgates kind of opened for a couple of minutes there and we got three.

“We had to keep our game simple. It was a tough one tonight, but we got it through and we were the better team in the end.”

Nicholas Canade and Cole Schwindt also scored for the Steelheads (23-23-3-1), who had their four-game win streak snapped.

ICE CHIPS: Goaltender Arturs Silovs made 41 saves to record his fourth win in his last five games…Blueliner Nathan Allensen returns to the lineup Saturday after serving his five-game suspension…The league finally announced a four-game suspension for Nicholas Porco for a slew foot, that didn’t draw a call, in last week’s loss to Sudbury…Clarke turns 16 on Sunday.