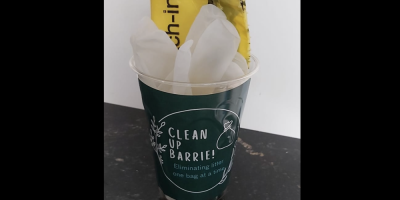 They are the most common item of litter.

But…you may have noticed fewer of them littering the streets of Barrie, thanks to the efforts of a group known as Clean Up Barrie – an offshoot of the Barrie Families Unite Facebook group.

“It came about because, early in the COVID lockdowns, the City of Barrie decided to pause their annual Spring Into Clean,” Clean Up Barrie ambassador Dan Slykhuis told Barrie 360. “So once they did that, there was a need, and Barrie Families Unite kind of said well, we can all get out there on our own and do this.”

And so they did.

A small group of members, clean up as much litter as they can in specific neighbourhoods. And there have been some corporate clean-ups with the help of the Barrie Rotary Club, Telus, and Barrie Geocache.

Then came a grant from The Great Outdoors Fund and Unsmoke Canada for litter cleanup, specifically targeting cigarette butts, which allowed Clean-Up Barrie to boost its supplies and also give away some prizes for its Butt-Out Barrie campaign in June.

But they’re not done yet.

“We’re going to Open Air Dunlop on Saturday, July 16, doing an end-to-end sweep of downtown trying to get every last butt out of the planters and gardens. We’ll have a table, we’ll be giving out prizes and some of our supply kits and things like that.”

Their goal is to fill a five-gallon pail with discarded cigarette butts. It’s already about half full.

Slykhuis says while the Clean Up Barrie Facebook group has more than 900 members, only a few have pitched in on a regular basis, so he’s always looking for more members and more help. “We had one household account for about 30% of the garbage picked up last year.”

And more help from the community, like the bags and gloves donated by Robinson Home Hardware and the garbage bag stickers from Bizerba Canada, which help the City of Barrie identify them for pickup after the fact.

Want to get involved? Click here for more information.