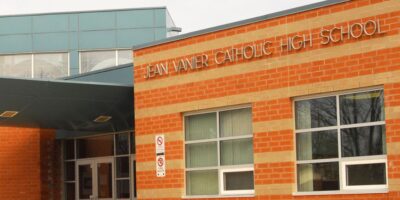 A Collingwood Catholic High School is moving forward with a new name. Our Lady of the Bay is the official new name of the school formerly named after Jean Vanier.

In February 2020, news became public about the school’s namesake, Jean Vanier, who was found to have assaulted several women over decades.

The Simcoe Muskoka Catholic District School Board says the news greatly impacted the school community. Counselling and support services were offered, they discontinued the wearing of school uniforms bearing Vanier’s name and formed committees to work on a path forward, including one tasked with renaming the school.

Board chair Joe Zerdin says the new name has great meaning for the Catholic Community in Collingwood. “It honours Mary, the Mother of Jesus, and pays tribute to the significance of the ‘Bay’ in the Collingwood community. It honours First Nations peoples and the immense ecological significance of Georgian Bay both historically and today,” Zerdin adds.

Students, staff, and families voted on the new name, with “Our Lady of the Bay” receiving a majority of the votes.