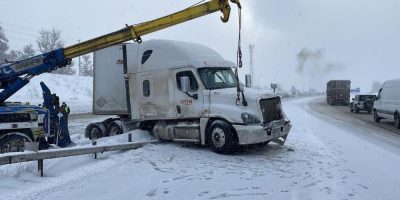 First responders were called out to the northbound lanes of Highway 400 on Tuesday morning when a transport truck plowed into the guardrail near Essa Rd. in Barrie.

No one was injured, according to OPP.

The Barrie area was roughed up by snow squalls and reduced visibility during the morning rush.

While the weather improved, the drive did not for motorists on the 400.

OPP say 8 to 10 vehicles including several trucks were involved in a collision just after the noon hour in the southbound lanes south of Innisfil Beach Road.

All three southbound lanes were blocked as police cleared the vehicles to a service centre.

No injuries were reported.

Provincial police also tweeted about a collision involving a tractor trailer in the Huntsville area earlier on Tuesday.

The rig went off the road on Highway 11 northbound near Stevenson Road 12.