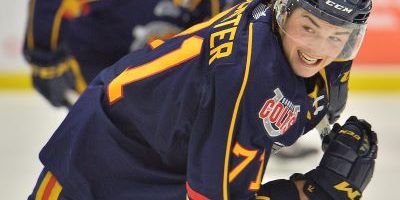 The Barrie Colts chose a tough place to play Friday night to get their game back on track.

Tyson Foerster scored twice and recorded four points and the Colts snapped an ugly five-game losing streak with a 6-4 win over the host Kitchener Rangers at the Kitchener Memorial Auditorium.

Coming off a disappointing 8-3 loss at home to the Sudbury Wolves 24 hours earlier and having been outscored, 32-11, during their skid, the Colts rebounded with a solid 60-minute effort against one of the OHL’s top teams.

“We really preached to them after last game and today they came out and did what they were supposed to do and that’s defend, No. 1, and take away a lot of their backdoor plays because they’re so slick with those plays,” Colts head coach Todd Miller said. “I thought overall we came together as a team and they kind of bought into that knowing that they haven’t played well the last couple of weeks.

“We needed a big one here and to do it here in Kitchener, against a team like that, just shows you what we can do when we’re playing the right way.”

“It was a huge boost for us to win in here,” Miller said. “I know it’s a tough building to win in.”

The Colts got a much-needed big night from their top line of Evan Vierling, Aidan Brown and Foerster. Vierling had a goal and two assists, while Brown also scored as the trio combined for four goals and eight points.

Foerster now has a team-best 36 goals and 44 assists for 80 points this season and the top NHL prospect surpassed the 100-point career mark with 103 points in 124 games.

“When he goes, we go,” Miller said of Foerster. “Vierling had a hell of a game, too. He’s battling more, he’s chipping pucks and he’s getting to pucks first, and that’s really good. Brown complimented those guys with his hard work and being on pucks tonight. Every time they went back for it they knew Brown was coming, so we got a lot of turnovers on that as well.”

Ethan Cardwell and Anthony Tabak also scored for the Colts (28-27-4-2), who are back to within six points of Sudbury atop the Central Division standings with seven games remaining.

Mike Petizian, Declan McDonnell, Jonathan Yantsis and Arber Xhekaj scored for the Rangers (38-16-5-2), who dropped their second straight and trail London by five points for top spot in the Midwest Division.

Vierling, Brown and Cardwell scored 2:45 apart at the end of the first period and start of the second to give Barrie a 3-1 lead. The Rangers, though, would storm right back to tie the game on goals by Petizian and Xhekaj a little more than three minutes apart in the same period.

Anthony Tabak, on a beauty set up by Nicholas Porco, would put the Colts on top for good late in the second when he rifled a shot past Rangers goaltender Lucas Pfeil.

“Obviously, the Sudbury game is a real sore spot for us,” Miller said. “I really think that they understood that we’re not playing around here and let’s get back to the way we were when we were rolling, and that’s the way they played.”

Jet Greaves was solid in goal, stopping 27 shots to grab his 12th win and his first since Feb. 13th in Niagara.

“It was nice to see Jet get that win,” Miller said. “It was a well-deserved win and he looked confident in net all night long. He made those saves look so easy and he needed that for his confidence.

“The guys played well in front of him, so that helped.”

The Colts wrap up a busy three-games-in-three nights weekend Saturday when they host the Ottawa 67’s. The OHL’s top team is well-rested, not having played since last Sunday.

“We’re going to definitely have to use our fourth line and I’m glad I got them in a little more tonight,” Miller said. “They did such a good job, so hopefully they get some mojo out of that and will be accountable again, and play more minutes again for us tomorrow night.

“We’re definitely going to have to go with four lines.”

ICE CHIPS: Vierling had the empty net with just seconds remaining, but instead gave it to a surprised Foerster to ice the win…Foerster’s power-play goal midway through the third was his league-leading 18th with the man advantage…Including tonight’s contest against Ottawa, Barrie has just three home games remaining on the regular-season schedule. All on Saturday night.