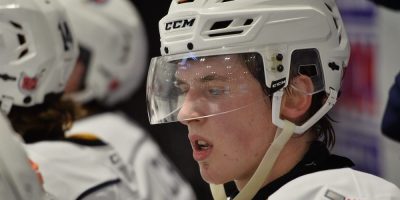 The Barrie Colts of earlier this season likely wouldn’t have walked out of the Harry Lumley Bayshore Community Centre Tuesday night with a win against the Owen Sound Attack after blowing a pair of two-goal leads.

That was then and this is now.

And right now, the Barrie Colts, who got the overtime winner from Ethan Cardwell to pull out a 6-5 victory, are a confident team on quite a run.

“The good thing about that is that you can still teach. When you’re emotional, you don’t receive anything. Coaching is pretty much useless to you at that point, you’re just too wound up. I’m finding this team very coachable right now, and that’s a real positive for us going forward.”

Trailing 3-1 after the first period, Attack veteran Ethan Burroughs scored a pair of goals just 11 seconds apart 1:50 into the second to tie it.

Brandt Clarke, with his second of the game, and Ethan Quick restored the two-goal Barrie lead less than seven minutes later, but Owen Sound would draw even again and send it into overtime later in the third on goals by Nolan Seed and a power-play marker by Orillia native Colby Barlow less than three minutes apart.

Brandt Clarke Joined Us On Our Podcast: Listen To Our Conversation

But Clarke, who has been on fire since being returned by the Los Angeles Kings last week, finished off an impressive three-point night when he stripped the puck off Owen Sound defender Teddy Sawyer at centre ice and then watched as Cardwell finished off a give-and-go with Evan Vierling for the winner.

“It’s a tough building,” said Williamson. “We had a lead the last time we were here (3-0 on Dec. 30) and ended up winning (5-4) in overtime. “They’re a good team. They don’t give up. I didn’t like some of the penalties that went against us that gave them the momentum at the end, but I loved the calmness of our bench.

“We gave up the two quick goals at the start of the second period and then fought back to get the lead. We’re doing a lot of good things. Yeah, we got to tighten up some areas, but that’s the process for the next 30 games.”

The Colts knew Clarke’s return was a big boost to the lineup, but the elite skills the captain has shown in just four games, including on Tuesday night’s winner, is an example of just how much he can impact a hockey game.

“He sure can. He just elevates everybody around him,” said Williamson of the blueliner who now has four goals and four assists for eight points. “When you see him doing things, you want to be better and that’s the infectious attitude that he has on us. There’s been a real maturity in Brandt as far as how he fits into (the team), he’s not near as emotional. He’s a pro and that’s infectious.

That’s one of the best things he’s doing for talking to (Beau) Akey, talking to (Artur) Cholach and different guys. He gets everybody engaged in the moment and we’re going to keep pushing Brandt to keep that attitude and keep working with our guys.”

Connor Punnett, Beau Jelsma and Ethan Quick, his first since coming in the trade deadline deal with Ottawa, also scored for the Colts. Anson Thornton made 27 saves to pick his eighth straight win and 10th in his last 11 games.

Cedrick Guindon had the other goal for Owen Sound (21-14-4), which had its three-game win streak snapped.

Corbin Votary gave up three goals on 14 shots and was pulled after the first by Owen Sound for Nick Chenard, who would stop 19 of 22 shots the rest of the way.

There’ll be no rest for the weary. After a stretch of seven games in 12 days this month, the Colts will be back at it Thursday night when they host the league’s first-place Ottawa 67’s.

“They’re not perfect conditions and we got to find ways to have energy and persevere,” Williamson said of the busy stretch that will also see them host Windsor, the top team in the Western Conference standings, on Saturday. “We need contributions from everyone that’s playing, not just two lines. We need four lines and that’s a great test for us.”

Game time at Sadlon Arena on Thursday is 7:30 p.m.

ICE CHIPS: Cardwell (1G-1A), Vierling (2A) and Akey (2A) had two-point nights. Barrie outshot Owen Sound, 36-32. . . The highlight goals continue for Barrie, including a beauty three-way passing play early in the second period between Cardwell, Vierling and Clarke, who finished it off. I think it starts at practice,” said Williamson. “Credit to Brandt and credit to everybody, we’re practicing better and making sure our shots are on net and we’re not missing the net as much. You notice are shot totals going up in games. We’re at 35, at 52 (in a 6-1 win over Flint last Thursday. We had a really strong spell there. We’re caring about the details, so we’re scoring more goals from the point with screens in front. When you do those kind of fundamentals, the pretty goals kind of line up and fall into place as long as you’re not just relying on them to be you’re only goals and that’s the good balance with our guys right now.”