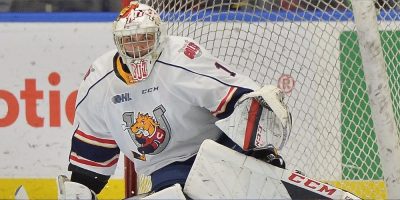 A second-half filled with injuries, suspensions and a crazy busy run of makeup games resulted in the Barrie Colts stumbling to the finish line of this year’s OHL regular-season schedule.

All that means nothing now that the playoffs are here. Jacob Frasca says he knows what he and his teammates are capable of as they get set to kick off their best-of-seven, first-round playoff series on the road Friday night against the Mississauga Steelheads.

“We know what we can do,” said the veteran forward, who returned for the season’s final game last Saturday after a concussion forced him to miss all but four games since Jan. 20. “When we have all our pieces in the lineup, we know what we can do and know what we’re capable of with (Mack) Guzda in net and just with our forward depth and defencemen depth and our amazing coaching.

“We can do some damage in the playoffs. We can surprise teams and maybe even surprise ourselves with what we can do, and that’s what we’re going to do.”

The opening-round Eastern Conference series pits the fourth-place Steelheads (37-23-2-6) against the fifth-place Colts (34-27-6-1) and while both teams split the eight-game season series down the middle, injuries continue to be a factor for Barrie heading in.

The team will be without captain Brandt Clarke on the blueline for at least two rounds if not the whole playoff run. The Kings prospect is expected to undergo surgery on his right knee in Los Angeles on Friday.

Clarke was injured in a game earlier this month in Peterborough when a referee pulled him from a scrum late in the game and fell on top of him.

“He’s going to be out an extended period of time,” Williamson said of the defenceman who finished tied with No. 1 NHL draft prospect Shane Wright as the smartest player in the Eastern Conference in this year’s OHL Coaches Poll.

“It’s been a pretty even series really,” Williamson said of the eight games against Mississauga. “One of the games we let go we had a 3-0 lead (5-3 loss on Feb. 24) and kind of let that one slide. Obviously not having Brandt for the series will be a bit of a factor, but we know if we play well, and if everybody can play their game, it should be a good series.”

The Colts could also find themselves without Guzda to open the series.

The overager, who was one of the OHL’s top goalies this season, missed two weeks with an unspecified injury before returning to play three games and re-injuring himself against Sudbury on the final day of March.

“We have hope for Friday, if not we think it’ll be another few days he’ll be ready to go whether it’s (Game 3) Monday or (Game 4) Wednesday if he did miss the first two games,” Williamson said.

“That’s the kind of thing you got to take it and see how he reacts to practice (this week) and hopefully if he’s good, then we’ll be good to go. If not, we’ll wait a little longer.”

Barrie will also be without Ryan Del Monte for an extended period of time. The forward is still dealing with a concussion and hasn’t played since March 19 nor is he skating yet.

The Colts have had to deal with the adversity all season and Williamson promises they’ll be ready regardless of who is in the lineup.

“We’ve had a lot of guys step up and play well,” he said. “It caught up to us a little bit right at the end where we went through a tough spell and we sputtered. It seems like now we’re going through a good thing if Guzda can keep progressing and we have a shot at getting him back whether it’s the beginning or middle of the series.

“It’s one of the things you have to deal with. Injuries are part of it, we lost a guy (Clarke) before the playoffs have started. Teams will lose guys in the playoffs and it’s about next man up and everybody doing their job, understanding the task ahead of us, and getting it done.”

Everything points to the first-round series being a close, one with low scoring.

Of the playoff teams, only Hamilton (176) gave up fewer goals in the OHL than Mississauga (189).

“Most of our games, if one team got to three or four (goals), it would be difficult for other teams,” Williamson said. “I think you’re going to see that and maybe even a bit tighter. It depends, you never really know. You could have four one-goal games that all go one way or they could be split early and you’re into a long series.

“You got to take it one period at a time, be prepared at the start, have the energy, get the nerves out, have the right game plan and see if it works and if it doesn’t work you got to be able to adapt and change and find ways to win hockey games.

“Maybe we’re the team that wins four close games and gets through the series quickly. You just never know how it can go with playoffs. Everything points to a tight series.”

A big reason for that is a big, physical Steelheads defense led by captain Ethan Del Mastro. The Chicago Blackhawks prospect, who comes in at six-foot-four and 206-pounds, is as tough to play against as any blueliner in the league.

Del Mastro was prominent in this year’s OHL Coaches Poll for the Eastern Conference players. He was listed as the top defensive defenceman and best penalty killer.

“So, our push back, our discipline, those types of things are going to have to be good. One of the things we think is an asset to us is our speed and if we can make quick decisions and move the puck quickly then that will nullify a bit of their size and being able to close us off in small areas.”

While the numbers don’t quite show it, the Steelheads still boast plenty of offensive talent upfront.

Innisfil native and overager James Hardie led the team with 41 goals and 77 points and is as dangerous as anyone in the OHL in the scoring areas.

Luca DelBelBelluz was right behind him with 30 goals and 76 points while fellow top NHL draft prospect Owen Beck had an impressive rookie season with 21 goals and 51 points.

While the Colts know they’ll need to keep a close on all three, they know Tyson Foerster will also be a main focus for Mississauga defenders.

Some big games from depth forwards would also go a long way in helping win the series.

“We’re going to do our best to keep their top scorers under wraps, they’re going to try and do the same with Foerster,” Williamson said of the Philadelphia Flyers prospect and their top player. “He’ll probably see a lot of Del Mastro with the line matching up the first two games, so we’re going to need other guys to step up and have big efforts for us.

“Those unsung heroes tend to be big playoff performers and that’s what we got to hope for.”

If Guzda isn’t ready Friday, the Colts will turn to backup Matteo Lalama. The first-year goalie was solid down the stretch and split four games against the Steelheads this season.

He was especially good in wins over Kingston and Niagara in the final month.

“He’s played 32 games this year, which is more than we would have anticipated,” Williamson said. “He’s done a great job for us for his first year in the league and I know our guys like him a lot. If we got to start him a couple of games, well then he’s played well against Mississauga and our guys are ready for that challenge to play well in front of him.”

As for the key to this series for his club, Williamson doesn’t hesitate.

“I think the consistency of our lineup will be one of the keys to it,” he said. “We need to be good up and down our lineup. We haven’t seemed to fare too well when we just had a line or two going. It kind of hasn’t worked for us, but when we’ve had everybody buying in and playing the same way our team has been effective.

“We had a real good spell there and then it seemed like we couldn’t get that consistency back, so for me that’s what I’m kind of looking at. Whether it’s Frasca’s line, Jelsma’s line, Haight’s line or Vierling’s line and our six defencemen, we need to have good efforts up and down our lineup and have no real weak holes.”

After nearly a full week since their regular-season finale against Niagara, Williamson believes his club is ready. This is the best time of the year and nothing like a battle between the two Central Division rivals to get it going.

“It’s exciting,” he said. “For us the timing has worked out pretty good with a couple of days off and we get three or four days of preparation, and then let the chips fall where they fall.

“You got two good teams that both had good seasons. One of us probably feel we could have won the division without some injuries and stuff like that, so I think we both have high expectations of having a good playoff run. That’s the exciting part of it now.”

ICE CHIPS: Game 2 of the series goes Sunday afternoon at 2 p.m. in Mississauga. The series returns to Barrie for Game 3 on Monday (7:30 p.m.) and Game 4 on Wednesday (7:30 p.m.). . . Other Colts mentioned in the 2022 OHL Coaches Poll include McDonnell, who was third in the conference as hardest worker, Artur Cholach was third as best defensive defenceman and Guzda tied for third for best puck-handling goalie and was the second best goaltender in shootouts. Clarke was also first as best offensive defenceman and third in best stickhandler. . . Former Barrie minor midget Hardie was third as the most dangerous in the goal area second in best shot.