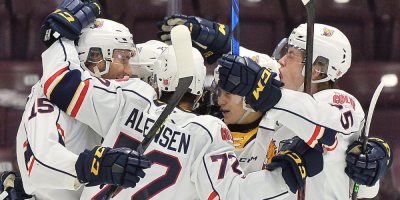 It didn’t come nicely wrapped, but the Barrie Colts will happily take a win in the Nation’s Capital and the six-game win streak that comes with it into the holiday break.

The streaking Colts got goals from five different players and Mack Guzda was his usual stellar self in goal to help the Colts put a bow on their pre-Christmas schedule with a 5-2 win over the Ottawa 67s, Saturday afternoon, at TD Place.

Ian Lemieux, Chris Grisolia, with his first OHL goal, Anthony Tabak, Nathan Allensen, and Beau Jelsma scored for the Colts (14-7-2-0), who may have had their minds elsewhere at times in this one.

“We’ll take it,” Colts head coach Marty Williamson said. “It wasn’t perfect and we’ve been off a long time. It’s a tough one. They know they’re going home after and they’re distracted, so we’re pretty happy we got the two points and it makes the bus trip home pretty comfortable.”

The Colts just keep rolling, despite having four games postponed due to COVID this month.

Barrie hasn’t lost a hockey game since falling 4-3 to the Owen Sound Attack back on Nov. 25.

“The team is just buzzing,” Grisolia said. “Six wins in a row, we’re off on a good streak. (We have) good guys in the room, everyone’s working hard, everything’s clicking. We’ve had some good practices and it’s going well.

“We just got to keep the streaking going after Christmas.”

After jumping out into a 3-0 lead midway through the second, things got a little messy when Luca Pinelli scored late in the second, and then Vsevolod Gaidamak cut the lead to one 55 seconds into the third period.

But a slumping 67s team (12-17-1-1), which has now lost five straight, couldn’t take advantage of a four-minute power play that followed and goals a little more than three minutes apart by Allensen and Jelsma helped Barrie hold the fort.

“We sure did,” Williamson said. “A lot of credit goes to Guzda. That’s a good goalie performance for us. We need that kind of performance when your team’s heads are wandering a little bit and I thought he was the better of the two goalies and did a good job.”

Guzda, who made 30 saves, has been exactly what the Colts hoped for when they acquired him last month from Owen Sound.

The overage goaltender has posted a 6-1 record with an impressive 2.22 goals-against average and .923 save percentage in seven starts for Barrie.

“It’s been huge having a goalie like that back there,” Grisolia said. “We have a lot of trust in him. He’s always there in case you make any mistakes and I think that’s really helped with the streak we’re on right now.

“Having all that confidence with the puck that if you turn it over Mack is back there to make the save you need, so yeah it’s been good.”

Grisolia also gave himself a nice early Christmas present early in the second period when he walked out of the corner and fired a short-side shot over the right shoulder of Ottawa goaltender Will Cranley for his first OHL goal.

“I just got the puck in the corner and kind of saw a clean lane to the net, so I took it out in front and saw a little opening short side and tried to get it up there and I was a little lucky,” the Colts rookie centre said. “It was a good play and it turned out well. It was a great feeling.”

Especially after ringing the post in the first period.

“It was real nice,” Williamson said of his rookie centre’s goal. “He hit the goal post there in the period before and the nice thing to see was the bench exploded. They were pretty happy for him.

“Those are all good little points and the team bonding and how we support each other. Things you really like to see.”

The Colts head into the holiday break with seven wins in their last 10 games and points in eight of their last 10.

They now trail both the North Bay Battalion and Mississauga Steelheads atop the Central Division standings by six points, though they hold six games in hand on North Bay and three on Mississauga.

The main concern, though, remains COVID-19. The pandemic is once again forcing the postponement of games in several sports and leagues, including the OHL.

While there remains uncertainty about whether or not Barrie will be able to face Owen Sound after the break on Dec. 28, Williamson knows all they can do is just be ready and focused when the next game comes.

“That’s it. You just don’t know what’s happening,” he said of the pandemic. “It’s going to be an interesting next 10 days and you just hope the game on (Dec. 28) is going. You got no control. I see leagues shutting down and taking a break.

“Whether we take a break or we keep going, we’re going to be ready for it.”

Grisolia is anxious to pick up just where Barrie left off with the six-game win streak, but he knows all he and his teammates can do is be prepared when the time comes.

“It (postponement of games) happened before, so you just got to keep working and hope for the best,” he said.  “Hopefully everything keeps going and we keep playing games. We just got to stay focused and dialed in.”

ICE CHIPS: Both Brandt Clarke and Beau Akey had two assists each. . . Hunter Haight (shoulder) returned to the lineup for the first time since he was injured in a game against Niagara back on Nov. 27. . . Roenick Jodoin had plenty of friends and family for his first game in Ottawa. The Colts rookie grew up in Cornwall. . . Ottawa’s Chris Barlas drew Evan Vierling into a fight the Colts veteran didn’t want and paid a price for it. Vierling sent Barlas to the ice with a flurry of right punches in a decisive win. . . Barrie was 1-for-5 on the power play, while Ottawa went scoreless on four chances. 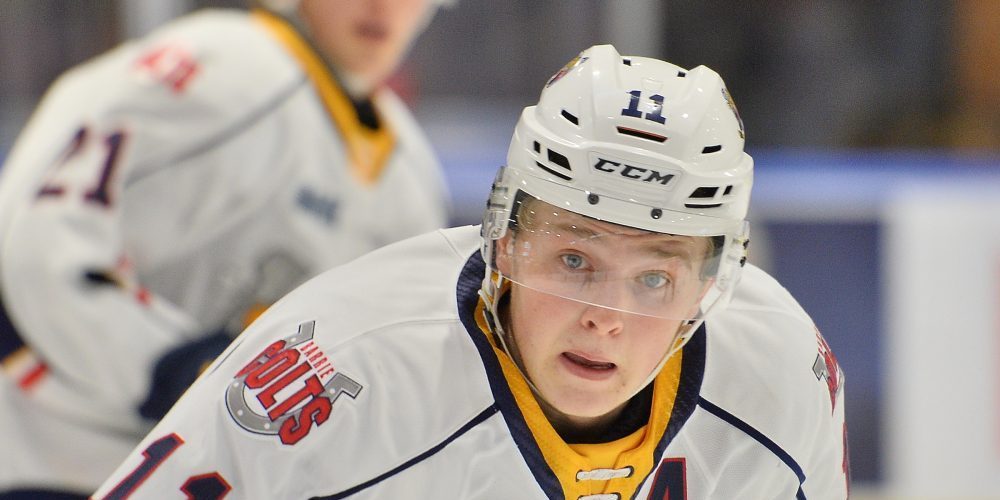 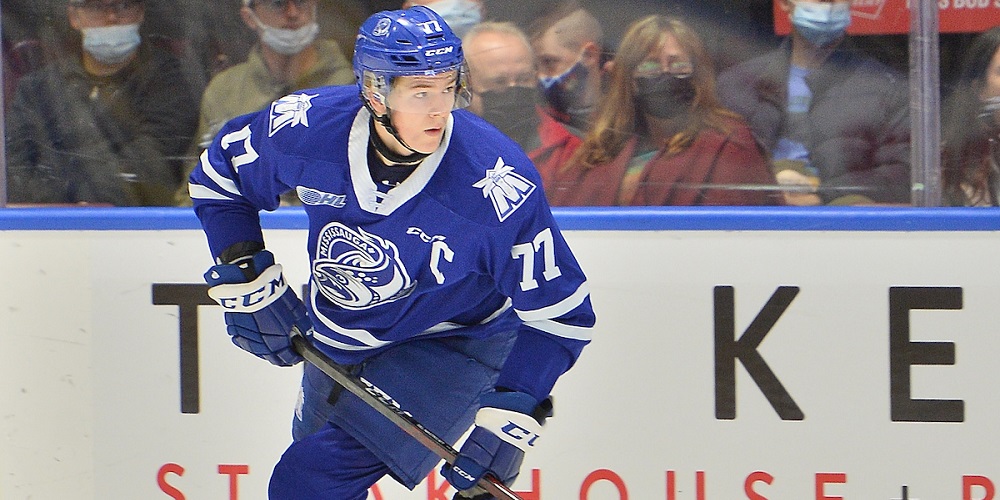 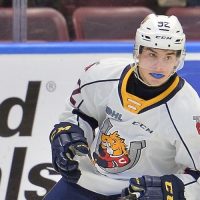 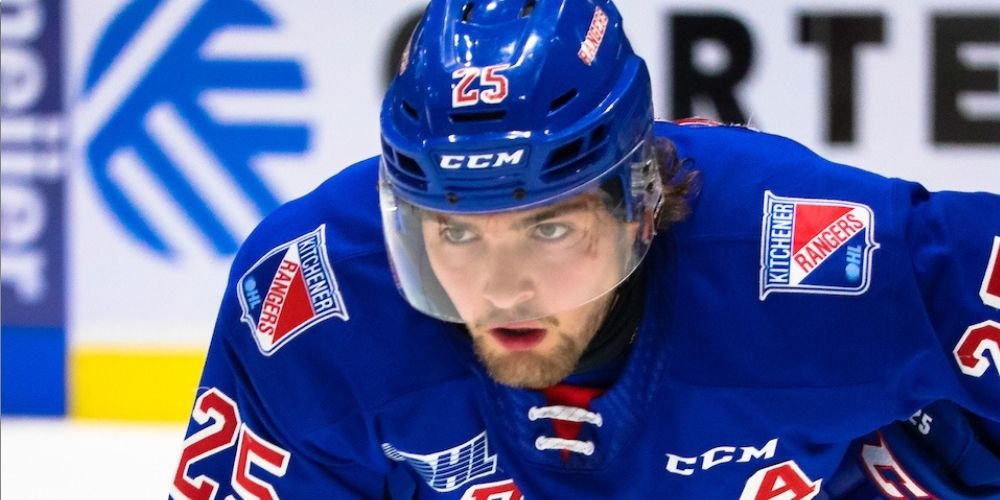 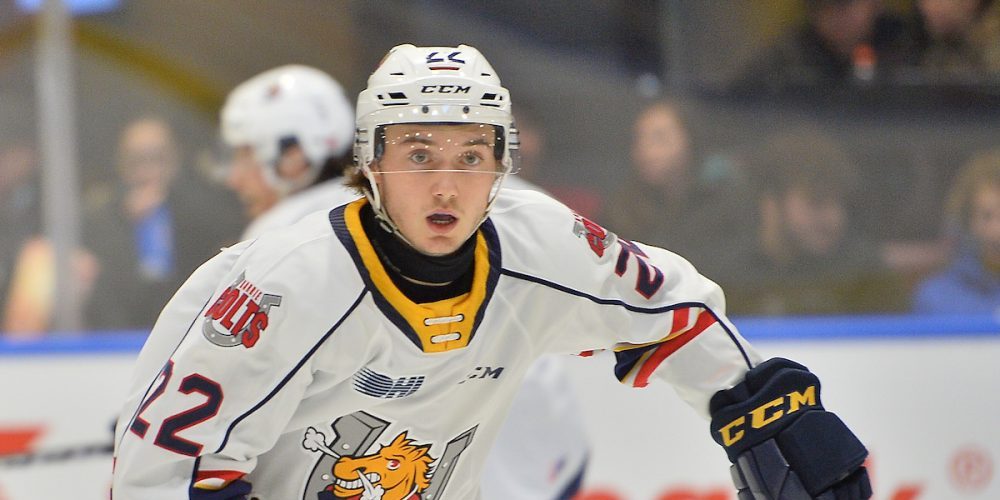