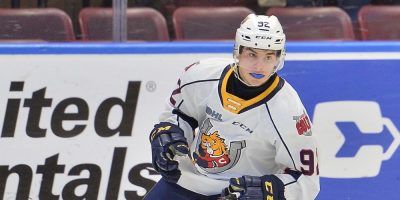 The Barrie Colts may have dealt away two of their top scorers, but they showed Sunday afternoon in Owen Sound the remaining lineup still packs a pretty good punch.

Barrie, backed by a pair of goals from Ethan Cardwell and rookie Roenick Jodoin’s first marker in the OHL, put on another strong performance with a convincing 7-3 thrashing of the Attack at the Harry Lumley Bayshore Community Centre.

Nathan Allensen, in his 200th OHL game, Hunter Haight, Cooper Matthews and Declan McDonnell, in his first game since being acquired from Kitchener, also scored for the Colts (15-7-3-0), who have won seven of their last eight.

“Real good,” Colts general manager and head coach Marty Williamson said of his team’s effort Sunday on the heels of a strong performance Saturday in a 3-2 overtime loss to the North Bay Battalion. “We’re morphing into that consistently hard to play against team and that’s what I told the guys I’m most proud of. We’re coming to play 60 minutes and we’re not making it easy on anybody.

“I was happy with the effort last night as I was (Sunday), just we were able to score goals.”

The Colts have hardly missed a step since trading away Oskar Olausson and Nicholas Porco ahead of Monday’s noon trade deadline.

Matthews believes the Colts strong play of late is a result of a team that has found its confidence and feels it can play against any team in the league.

“We’re a pretty deep team,” said the winger who has been thriving in a bigger role. “We’ve got a lot of young guys on it, so we know we can rely on them to put them in (key) situations no matter what.”

Related: Colts boost offence with acquisition of McDonnell from Kitchener

The Colts made a pair of deals with more of an eye on the future, but Williamson says that doesn’t mean they won’t remain competitive this season. Their recent play, he believes, shows that.

“We are,” said Williamson when asked if he believes this is still a good hockey team that will compete this season. “We get (Evan) Vierling back in and that gives us another weapon.

“Yeah, we think we can play with anybody.”

Matthews is one of the players Barrie has turned to take on a bigger role, and the first-year winger has really made a big step in his game of late.

After scoring in a strong effort against North Bay on Saturday night, the former 2020 third-round pick (48 overall) had a goal and assist in Owen Sound.

His helper came on a beauty no-look feed from the side of the net to Cardwell in front to make it 2-0 for Barrie early in the first period.

“He just sees the game real well,” Williamson said of Matthews, who he believes is taking a big step in his development similar to the one made by Brandt Clarke after 20 games in his rookie season.

“(Clarke’s) got real comfortable and taking off, and we’re seeing the same thing here,” continued Williamson on Matthews. “He understands what he needs to peak and what he has to get done, and the light bulb has gone off.”

Matthews admits he’s starting to feel more comfortable on the ice now that he’s got some games under his belt.

“Definitely it’s confidence,” said the five-foot-nine, 170-pound winger who has five goals and eight points in 25 games. “I’ve been working on some stuff over the break. I watched some video and realized what I could do better and just been working at it.”

Matthews got some top-six minutes upfront, and he’s taking advantage of it.

“With those guys gone, I’ve kind of had to step up and so far I’ve been able to capitalize on the chances I’ve been getting,” he said.

McDonnell made a strong debut in a Colts uniform after being officially acquired Sunday morning.

The veteran winger delivered a big hit on his first shift and then wired a drive inside the post for his first goal with Barrie and his 11 of the year.

“I thought he made a big impact on the game,” Williamson said of the Tampa Bay Lightning prospect. “He had a huge hit in the first shift of the game and that really energized us, and then he played a solid game for us.

“Seeing him get rewarded (on his goal), that was a heck of a shot at the end of the game there.”

Lalama picked up the win with 22 saves in making his second start of the weekend in place of starter Mack Guzda who is getting some extra time to recover after battling COVID.

“That boosts everybody’s confidence and we know the big guy is coming back next week,” Williamson said of Lalama helping the Colts pick up three of four points on the weekend.

Guzda wasn’t eligible to skate and return to the ice until Friday.

“He felt a little tired and we just didn’t think it was the right thing to put him in,” Williamson said. “We honestly believe in Lalama, we know he’ll battle and everything.

“You feel good when you made the right call and we gave (Guzda) a few extra days. Get him some extra practices next week and get him in top shape for next weekend.”

The overager should set to return when the Colts hit the road Thursday to take on the Niagara IceDogs.

ICE CHIPS: Vierling completed his two-game suspension and will return Thursday night against Niagara. . . Barrie outshot Owen Sound, 35-25. . . Clarke recorded three assists and now has five goals and 23 assists in 23 games. . . Haight’s seventh of the season was also his third goal in the last four games. . . Following Thursday’s contest against Niagara, Barrie has a stretch of six games in 10 days. 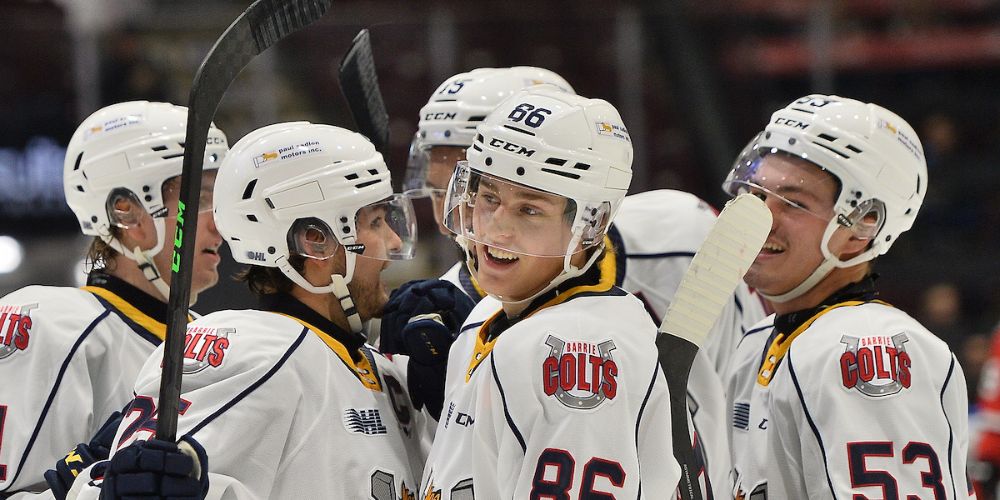