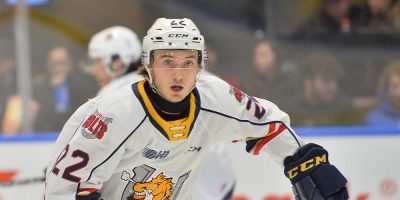 The Barrie Colts deserved a better fate Saturday night, but the OHL’s leading scorer made sure that didn’t happen.

Brandon Coe scored at 1:51 of overtime to give the North Bay Battalion a 3-2 win at Sadlon Arena and spoil a strong effort by a Barrie team playing its first game in three weeks.

The San Jose Sharks prospect, who leads all OHL scorers with 21 goals and 35 assists for 56 points in 32 games, raced in on the right side and waltzed behind the net before burying the winner on a wraparound.

Despite the loss, that snapped his team’s six-game win streak, Barrie head coach Marty Williamson had nothing but praise for his club.

The Battalion (18-11-2-2) capitalized on the home team’s shaky start to take the lead just 4:16 into the game when Matvey Petrov beat Matteo Lalama on a shot along the ice for his sixth goal in five games against the Colts this season.

Barrie carried much of the play from that point forward, outshooting North Bay 26-11 over the next two periods.

They would be rewarded early in the second when Hunter Haight ripped a short-side shot past the glove of North Bay goalie Joe Vrbetic to tie it at 5:42.

The Colts went ahead a little less than 11 minutes later on the power play when Cooper Matthews fired a one-timer past Vrbetic.

Kyle McDonald, playing in his first game with the Battalion since being acquired earlier in the week from Windsor, tied it at 2-2 with just 13 seconds remaining in the second.

The Colts will see a familiar face when they return to action Sunday afternoon in Owen Sound. Overage forward Nicholas Porco will make his debut with the Attack after being acquired from Barrie earlier this week.

ICE CHIPS: Saturday’s game was the first in Barrie with no fans since the province moved back into a modified Step Two of the Roadmap to Reopen. . .  Barrie centre Evan Vierling sat out the first of a two-game suspension. . . Forward Ben Pickell, signed earlier this week, made his OHL debut with the Colts. Pickell is a cousin of Barrie veteran Ethan Cardwell. . . Saturday’s contest was game No. 100 for Cardwell. Nathan Allensen will play in his 200th game when Barrie faces Owen Sound on Sunday.