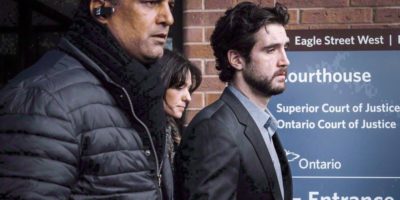 A man convicted of driving drunk and killing three children and their grandfather in 2015 has been granted full parole.

No matter what happened today, Daniel, Harry and Milly are not coming back home. My dad isn’t coming home to my mom.
Nothing changed for me.
My family’s killer Marco Michael Muzzo was granted full parole.
Thank you for doing your best.
I did. #ConsequencesMatter #NotOneMore pic.twitter.com/Nsfojo5Dg6

Muzzo was granted day parole in April of 2020 and moved out of a maximum-security facility the following month. He had been living at a community facility since, under conditions such as being banned from consuming alcohol, not contacting the families of his victims, and not being permitted within Brampton or York Region. It is expected these restrictions will remain in place while on parole.

Muzzo faced 18 charges at the time of his arrest in September of 2015. According to court documents, he was driving home from Pearson International Airport, having just returned from Miami, when he collided with a minivan carrying six family members. The responding officer reported Muzzo was blurry-eyed, smelled of booze, and had urinated himself.