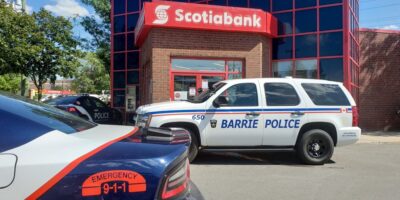 UPDATE: Barrie Police said on Saturday that the suspects got an undisclosed amount of cash and fled in a car.

A description of the suspects and the vehicle is not available.

The Barrie Police Services is on the hunt for a few suspects after a hold-up at a bank in the south end of Barrie.

An eyewitness tells Barrie 360 three men entered the Scotiabank at the corner of Yonge Street and Minet’s Point Road before 4 p.m. Friday, and demanded money. Police spokesperson Peter Leon confirms at least two suspects are being sought after the incident, adding they are working on obtaining security camera footage from the bank.

There were no injuries reported. Investigators remained on scene through late-afternoon Friday.