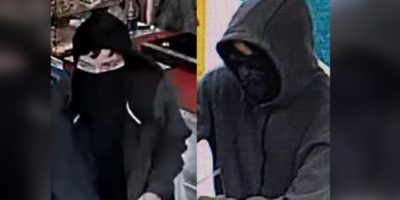 Barrie Police are on the hunt for a suspect believed to be behind a pair of armed robberies yesterday.

The first on happened at a convenience store on Cundles Road off Bayfield around 12:30 Sunday afternoon. It’s said the bad guy showed the clerk a knife and demanded cash.

Later that afternoon, around 5:00, police say the same suspect pulled the same trick at a pet store on Livingstone Street.

In both cases, nobody was hurt. Police say the thief switched up his outfit between jobs.

Anyone who may have information should contact Detective Constable Scott of the Barrie Police Service at 705-725-7025 ext. 2741 orrscott@barriepolice.ca. Any information can be provided anonymously to Crime Stoppers at 1-800-222-TIPS or leave an anonymous tip online at www.p3tips.com.