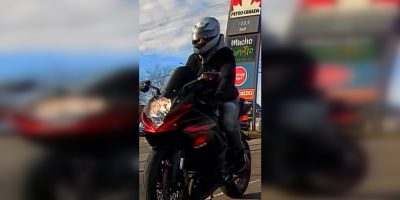 Police are on the hunt for a biker after they say a motorcycle sideswiped one vehicle before driving into the back of another, fleeing the scene from there.

A hit-and-run crash was reported just after 1:30 on the afternoon of November 28. Police say a motorcycle collided with two other vehicles on Bayfield street, and failed to remain afterwards.

To top it all off, police say the licence plate didn’t belong on that motorcycle. The driver is described as a white male of average build and height, about 20 to 30 years of age, with a silver helmet, black hooded jacket, and blue jeans. The motorcycle involved is described as being a black Suzuki GSXR with grey and red accents.

Anyone with information is asked to email 6150@barriepolice.ca