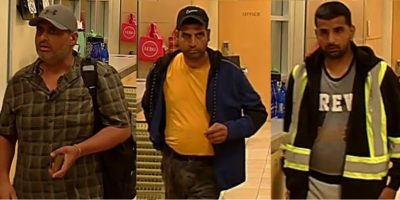 South Simcoe Police are on the hunt for three men suspected of stealing some high-value alcohol.

Police say the theft happened around 8:00 on the night of September 25th. Numerous bottles of liquor, valued at several hundred dollars, were taken from the LCBO on Holland St. in Bradford. Investigators have since released security images of the trio of suspects believed to be behind the theft.

South Simcoe Police have given the following descriptions:

Anyone who recognizes these men or has any information regarding this theft is asked to contact Constable Ranjit Sandhu at 705 436-2141, 905- 775-3311 extension 1409, email ranjit.sandhu@southsimcoepolice.ca, call Crime Stoppers at 1-800-222-8477(TIPS) or submit tips online at www.crimestopperssdm.com.