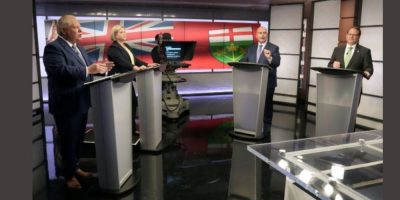 Two of the leaders of Ontario’s four major political parties have been sidelined with COVID-19 at critical points in their campaign, with two weeks left to election day.

All four party leaders were in relatively close proximity and unmasked on Monday night during a televised election debate. Horwath said she doesn’t know where she caught the virus and Schreiner said he tested himself Wednesday after close contact with a staff member who ended up testing positive.

Horwath and Schreiner are now campaigning virtually, but it takes them off the campaign trail in person at pivotal moments.

Schreiner was trying to build momentum following a debate performance that earned him plaudits and Horwath was just about to embark on a tour of the north, a critical area of support for her party.

“I am really regretful that that’s been turned around,” Horwath said over Zoom on Thursday morning.

She is hopeful that her schedule for the remaining days of the campaign can be shuffled around so she can get up north, but for now, she is isolating in an Ottawa hotel room.

“I feel like I have a bit of a bug, you know, headache and sore throat, not really bad, though,” Horwath said. “I’ve been taking Tylenol, and that kind of takes the fever down. But I’m certainly not 100 per cent.”

Horwath said she will not return to the campaign trail in person until she returns negative tests for COVID-19. Current public health guidelines only require her to self-isolate for five days, but many people report testing positive for 10 days or more.

Schreiner was unclear on how long he would stay in isolation, only saying he would campaign remotely “as long as I need to, to make sure we prioritize health and safety.”

“I’m confident that we’ll be able to continue campaigning, and building on the momentum we have,” he said over Zoom.

Susie Heath, a senior consultant at the public affairs firm Crestview Strategy and a former Liberal staffer, said both leaders would have been counting on getting face time with both supporters and potential supporters. Foregoing that will present a challenge.

The leaders can still do media appearances and speeches remotely, but they will be missing the in-person connections, Heath said.

“When they’re meeting people in the riding…this is them engaging with people on whatever issue people might approach them on, and people really watch how they how they respond,” she said.

“It’s a bit of a more natural environment, I’d say. So, certainly for any candidate, that’s a bit of an unfortunate time for this to happen.”

Melissa Bruno, former national director for the federal NDP and a government relations principal at Earnscliffe Strategies, said Horwath is a good in-person campaigner, so not making use of that campaign element will be disappointing.

“The campaign gets a boost of energy, because they’re feeding off of the crowd and on the flip side, people get to see Andrea in person, they get to meet her,” Bruno said.

“They come to like her very quickly and obviously, that has a pretty significant benefit to her and the wider party in terms of what that means for translating likeability into votes.”

Ford said he tested himself Thursday morning “out of an abundance of caution.”

“I encourage everyone across Ontario to continue following the protocols,” he said. “(If) you have symptoms, please get tested.”

“I think this is a good reminder that though we all want to be on the other side of this pandemic, that there are still risks, and that so many … here in Mississauga and across Ontario, are still struggling,” he said.

“We can’t simply just pretend that everything is fine, that everyone’s OK.”

Meanwhile, advance voting locations opened Thursday, running until May 28, ahead of the June 2 election.