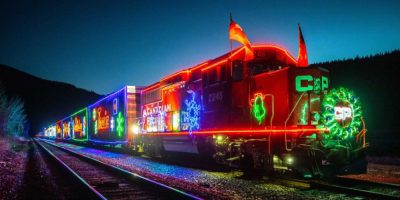 After being sidelined for two years because of the pandemic, the Canadian Pacific (CP) Holiday Train will clickety-clack on the tracks across North America including a stop just outside Barrie.

There are actually two Holiday Trains, one that is in Canada and another in the United States.

The Holiday Train has been around for 23 years, and during that time, it has raised over $21 million and collected five million pounds of food for community food banks in North America.

“The Holiday Train is all about families and communities coming together to celebrate the season and help those in need,” CP’s CEO, Keith Creel, said in a news release. “We are excited to be back out on the rails in our communities, taking these two beautiful trains across our network and sharing the joy that comes with gathering in the spirit of giving.”

The train will pull into Midhurst on Anne Street North just south of the Highway 26 railway crossing on Wednesday, Nov. 30 at 12:15 p.m.

There will be a concert featuring musicians Aysanabee and Tenille Townes beginning at 12:30 p.m., lasting for 25 minutes.

The train will then move on to Mactier and Parry Sound.

People who come to see the train are encouraged to bring non-perishable food items or money to donate.