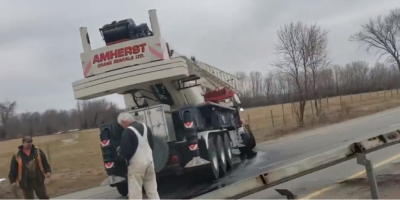 Nobody was hurt after a transport truck carrying a crane took out several meters of Highway 11 guardrail.

Here's video of the crash on Highway 11 that shut down lanes today, courtesy Ariel-Rose Emerson.

All southbound lanes are closed at 12th Line of Oro, one lane open northbound at 11th Line. pic.twitter.com/RNfFHVbO1Q

The crash happened after 1:30 Monday afternoon, when it appears the northbound transport truck went through the centre guardrail and into southbound lanes.

The OPP began shutting down lanes shortly after, to maneuver a heavy tow onto the scene, saying the partial closures could last several hours.