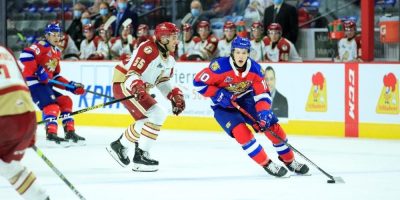 The Memorial Cup is paying a visit to Barrie this Saturday (August 13).

Barrie native Philippe Daoust, who helped the Saint John Sea Dogs win the Canadian Hockey League championship this season, is bringing the storied trophy to the Mind To Muscle training facility, located at 500 Huronia Rd., between 9 a.m. and 10:30 a.m.

Local residents are invited to get a look at the Memorial Cup, get Daoust’s autograph and get their picture taken with the national major junior hockey championship trophy.

Daoust played a major role in the tournament for the Sea Dogs, playing a key role and finishing with six points.

It proved to be quite a way for the Barrie native to cap off his junior hockey career. Daoust, who played two seasons with the Moncton Wildcats, was acquired by the Sea Dogs at the QMJHL trade deadline in January.

A sixth-round pick by Ottawa in the 2020 NHL Entry Draft, the centre actually started the season with American Hockey League’s Belleville Senators, playing 15 games before joining Saint John at the deadline/

The 20-year-old forward, who had 24 goals and 23 assists for 47 points in 38 games with the Sea Dogs, does an off-season strength and conditioning program at Mind to Muscle along with other local professional and OHL players.

“Philippe continues to be a very dedicated athlete and has seen significant physical development in our M2M program Strength and Conditioning Program,” said Isaiah Moriera, Manager of Hockey Training at Mind to Muscle. “We are thrilled to see his success.”

Daoust will be attending NHL training camp with Ottawa in September.