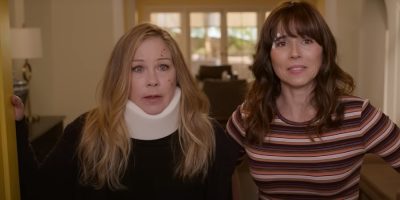 Netflix has released the official trailer for the third and final season of “Dead to Me.”

The hit show starring Christina Applegate and Linda Cardellini left on a cliffhanger season 2 nearly two years ago. And for a while, the show’s future was up in the air.

Applegate was diagnosed with Multiple Sclerosis shortly after filming of season 3 began, and they took a five-month hiatus.

In an interview with The New York Times, Applegate said finishing the show was incredibly hard, physically and mentally, but she wanted to do it.

“I had an obligation to Liz and Linda, to our story. The powers that be were like, ‘Let’s just stop. We don’t need to finish it. Let’s put a few episodes together.’ I said, ‘No. We’re going to do it, but we’re going to do it on my terms,” she explains.

Applegate started navigating her boundaries, like her work hours and limiting her time in the heat.

Heat sensitivity is common for people with MS. High heat and humidity will elevate their core temperature and trigger symptoms.

There were a lot of other logistics to figure out. She would use a wheelchair to make it on set. In some scenes, she needed her legs held by a crew member, and she would lean up against doors while filming scenes to keep her balance.

In the interview, she also praised her co-star and real-life good friend Linda Cardellini, who she describes as “My champion, my warrior, my voice.”

I have a very important ceremony coming up. This will be my first time out since diagnosed with MS. Walking sticks are now part of my new normal. Thank you @neowalksticks for these beauties. Stay tuned to see which ones make the cut for a week of stuff. pic.twitter.com/O543p1G4vS

“This is the first time anyone’s going to see me the way I am,” she said to the Times. “I put on 40 pounds. I can’t walk without a cane. I want people to know that I am very aware of all of that,” she stated.

When it comes to the final season, she says she wanted to give the characters a good sendoff and hopes others feel the same way.

“I’m sure that people will be, like, ‘I can’t get past it.’ Fine, don’t get past it, then. But hopefully, people can get past it and just enjoy the ride and say goodbye to these two girls.”

The final season of “Dead To Me” premiers on Netflix on November 17.

Watch the trailer below. I’m laughing and crying at the same time.