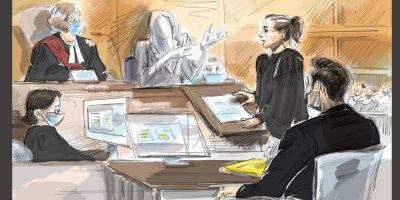 Defence lawyers are suggesting a young woman made up a “rape story” about Canadian musician Jacob Hoggard because she was embarrassed a rock star had used her for sex.

During cross-examination Monday, defence lawyer Megan Savard suggested Hoggard and the woman, who was 16 at the time, had consensual sex in the singer’s Mississauga, Ont., hotel room on Sept. 30, 2016, after he sent a limousine to pick her up in her hometown north of Toronto.

Savard suggested the teen became upset at the end of the encounter because Hoggard called the driver to pick her up, and she was too embarrassed to tell her friend – one of two people who knew where she’d gone – why she was leaving hours earlier than planned.

“The thing that upset you is the fact that after having sex with this rock star, he called the car to pick you up earlier,” Savard told the woman at Hoggard’s sex assault trial in Toronto.

“The thing that upset me was that he had unconsensual sex with me where he hit me, I was bleeding and I continuously told him no and was crying. That’s what upset me,” the woman replied.

At a different point in her cross-examination, Savard also suggested the teen felt “like a fool” for believing Hoggard’s lines and having consensual sex that was “meaningless to him.”

“You were upset that you had fallen in love with a rock star and that he used you for sex,” she said.

But the woman said she felt “betrayed” because she was raped and realized she had been manipulated into trusting Hoggard. She previously told the court she was a big fan of Hedley, the band Hoggard fronted, and had seen them perform 10 to 15 times since the age of 10.

The woman, who is one of two complainants in Hoggard’s sex assault trial, alleges the singer repeatedly raped her vaginally and orally in his hotel room, and attempted to do so anally.

Hoggard has pleaded not guilty to two counts of sexual assault causing bodily harm and one of sexual interference, a charge that relates to the sexual touching of someone under 16.

In earlier cross-examination on Monday, Savard suggested the woman was “reciprocating” Hoggard’s sexual interest as they exchanged messages in lead-up to the hotel encounter. She pointed to the fact that the two had traded nude photos.

The woman replied that while she may “potentially” have expressed sexual interest in Hoggard, they weren’t “sexting” or describing sexual acts they wanted to do.

“There was never a message that said that I wanted to have sex with him,” or discussing having sex on the day they met up, she said.

The woman began her testimony last Thursday, saying she met Hoggard on a few occasions at concerts and fan events for Hedley, and they began messaging each other after a meet-and-greet in April 2016, when she was 15.

She testified the messages grew romantic and sexual over time, and Hoggard told her he loved her and saw a future with her.

The woman alleged that he groped her backstage at a show in Toronto a few weeks after they started texting. They then made plans to meet in the city the following week for a day of shopping and sightseeing, but that plan was postponed to September, she testified.

This report by The Canadian Press was first published May 9, 2022.