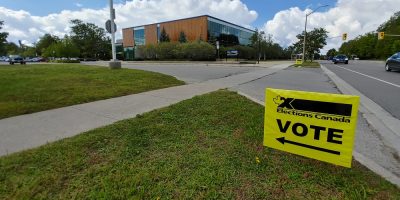 Advanced polls opened across Canada on Friday, allowing folks to cast a ballot in the race to be Prime Minister. But this year, going to vote is anything but fast.

A number of factors have impacted the voting process this year, leading to longer wait times at advanced polling stations like that of the Holly Rec Centre in Barrie. One social media user said she was waiting for 45 minutes to cast her ballot.

A long line and a wait time of up to 30 minutes were also noted at the Painswick Library polling station in Barrie’s south end.

Réjean Grenier with Elections Canada tells Barrie 360 one of the main reasons for the slower process is manpower. “In this election year, we were hampered by two things. One, it’s a short election, so you have less time to recruit,” he said. “Secondly, the COVID situation also makes it more difficult to convince people to come and work in a place where there’s going to be people congregating.”

Grenier added they were limited in the locations that could be used as polling stations this year. “School boards, for example, did not allow Elections Canada to put polling stations in a lot of their schools,” he explained.

Adding to the issues of recruiting and limited location, Grenier says they’ve still got to abide by COVID rules within. “At every polling desk, there will only be one person as opposed to two as we have in the past, simply for social distancing.” Grenier went on to point out that this is just the first of four advanced polling days. Those who can’t wait in line today have until Monday.

Meanwhile, mail-in voting remains an option, but not for long. The deadline to apply for a mail-in ballot is Tuesday, September 14. Grenier says you shouldn’t wait until then, however. “It will give Canada Post and Elections Canada more time to send you your voting kit, and for you to mail it back because it has to be in at an Elections Canada office by the end of voting at 9:30 on Election Day.”

Grenier points out they’re still looking for folks willing to work polling stations up to and including Election Day. He says it’s well worth your while. “Working at Elections Canada is actually a pretty good gig. I mean, you can make easily between $200 to $300 in one day. You get paid a minimum of $17 to $22 an hour, and we pay overtime.” Poll workers are trained and get $54.65 for the session.

Applicants need to be a Canadian citizen and at least 16 years of age on Election Day. Those interested can apply online or contact their local Elections Canada office.