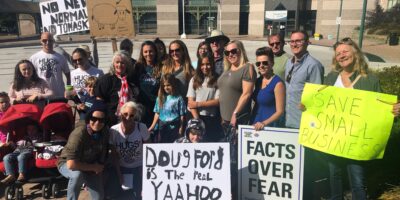 About two dozen people, some who brought their infants and young children, gathered outside Barrie City Hall on Wednesday to protest the mandatory wearing of masks and lockdowns because of COVID-19.

There were signs that said “Facts Over Fear,” and “Doug Ford is the Real Yaahoo.”

Some of the demonstrators said they were not anti-masks but were more concerned about their freedoms being chipped away and the impact lockdowns have had on people’s livelihoods.

Many greeted each other with handshakes and hugs, and none were wearing masks.

Kari Newkirk of Barrie said she wanted it to be her own personal decision about whether to wear a mask.

“It’s all about getting people to conform.”

She said the next thing is going to be a mandatory vaccine.

Newkirk said the economy is being shut down for no reason over a virus that has a survival rate of 97 to 98 per cent. She called it a “plandemic.”

Newkirk said she had no friends or family that were vulnerable, though believed the elderly should be protected.

In favour of herd immunity, Newkirk wants the virus to be “let out.”

“If it doesn’t come out, we’ll be doing these lockdowns forever.”

She said what you get with that is depression, suicide and unemployment.

Since he operates out of a municipal building, Robinson said he has been locked down by the government.

“Essentially, I am under. I don’t have a business under these restrictions.”

Robinson said he needs to speak out for business people and take a stand against these measures because he hasn’t heard anything himself.

He doesn’t deny COVID-19 exists. Robinson said it is harmful to the elderly and people with weakened immune systems.