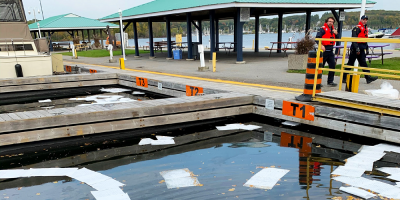 The Town of Midland is crediting the quick thinking of its harbour master with helping to curb the spread of a diesel spill.

Late Monday afternoon, Harbour Master Rick Dalziel spotted a sheen in the water of Midland Harbour along with the strong smell of diesel in the air. He first notified town staff and then the Ontario Ministry of Environment’s Spill Action Centre. The Coast Guard was sent to assess the potential size and spread of the spill, while the town called in a professional cleanup crew to tackle the mess.

While the cleaning crew was able to use absorbant mats to extract the fuel, the Coast Guard circled the area by helicopter to look for signs of a diesel spill elsewhere. The source of the spill has not been determined.

“Our storm sewer system was investigated as a possible source, however there was no sign of any diesel fuel within the system, and the boats still in the harbour did not show any indications of being the source either,” said Andy Campbell, Executive Director of Environment and Infrastructure. “The Coast Guard estimates this was approximately 5 to 10 gallons of diesel fuel. One litre of diesel fuel has the potential to spread over 3,000 square meters. Thanks to the quick action by Rick, this situation appears to be contained and the potential spread avoided.”

Cleanup crews were expected to be on-site for the remains of Tuesday afternoon to ensure all the fuel has been cleared.