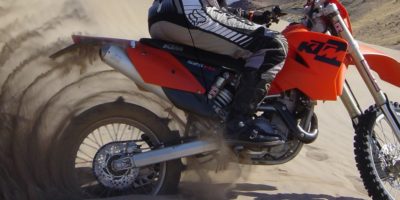 Police are on the hunt for the driver of a dirt bike that got away.

Around 5:30 Monday afternoon, police spotted a dirt bike along Highway 90 and George Johnston Rd. in Essa that lacked a license plate or lighting system.

The officer tried to stop the bike, but say it sped off so he backed down for safety’s sake. A short distance down the road, a witness says the bike crashed into the eastbound ditch, while the driver fled on foot into the trees.

The driver is described as male, wearing dark coloured coveralls and a white helmet. Anyone with information is asked to call the OPP at 1-800-333-1122.