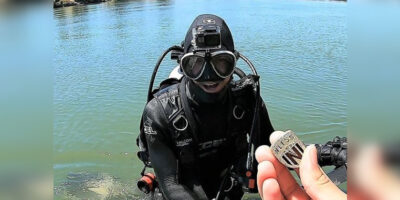 A scuba diver who often ventures into Northern California’s waterways recently found a valuable item – and he didn’t keep for himself.

Mike Pelley calls himself “Merman Mike.” He’s not really half-man, half-fish, but he spends a lot of time in the water near Sacramento. The avid scuba diver says he searches for lost treasures and cleans up the trash along the way.

“Also, I always try my best to return anything I find to the original owner,” he says on his Facebook page.

“Merman Mike” has a YouTube channel where he documents his diving adventures. This week, he shared the story of a lost ring he found in the Sacramento River.

Pelley was approached by a man named Bill Fitty, who said on the “Merman Mike” YouTube channel that he lost a “valuable, precious ring” given to him by his brother. “We just need that ring back today, and we came to the merman to see if he could come through for us,” Fitty said in the video.

Pelley said he would try his hardest to find the ring, but he was wary because of the current in the river, which he had never been diving in before. “If it doesn’t look like I can do it safely, I’m going to have to come back up,” Pelley said. “I’m having pretty high hopes, he knows exactly where he dropped it, right off the side of the boat, where he dropped his ice chest.”

The rest of the YouTube video shows Pelley’s attempts at finding the ring. After his first dive didn’t work, Pelley resurfaced and decided to drop a brick near where Fitty said he lost the ring. That way, he had a marker of where to look.

The idea worked, and Pelley’s underwater camera captured him shouting for joy when he found the ring. He returned to the surface again – this time with it in his hand.

With his lost possession returned to him against all odds, Fitty said he wanted to give Pelley $1,500 so he could buy a metal detector for his future dives.

“I’m like getting choked up talking about it,” Pelley told CBS Sacramento. “Doing this has brought back the good in humanity in me because everyone I talk to is always so grateful and happy.”

Pelley told the station he already knows what he’s going to look for with the new metal detector. He said he’s on a mission to find two wedding rings that his current equipment isn’t able to pick up.