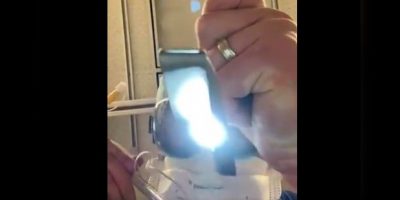 A Missouri doctor recently published a chilling video recreating what a COVID-19 patient may see in the moments before they die. In the now-viral video, Dr. Kenneth Remy hovers over the camera in full PPE, giving the viewer the perspective of someone lying in a hospital bed.

“I hope that the last moment of your life doesn’t look like this,” Remy, a Washington University in St. Louis researcher and physician at Barnes-Jewish Hospital and St. Louis Children’s Hospital, said in the video.

In the video, which was shared on his Twitter, the doctor said that in the moments before their death, a COVID-19 patient would breathe 40 times a minute and have an oxygen level dipping well below 80.

“This is what you’ll see at the end of your life if we don’t start wearing masks when we’re out in public,” Remy said. “When we don’t practice social distancing. When we don’t wash our hands frequently. Because I promise you, this will be what you see.”

Please listen as this is dire. I don’t want to be the last person that looks in your frightened eyes. #MaskUp ⁦@DrKenRemy1⁩ ⁦@WUSTLmed⁩ pic.twitter.com/qwb4eERlfE

The doctor urged Americans to follow guidelines to help prevent the transmission of COVID-19. The virus has killed more than 260,000 Americans, according to data from Johns Hopkins University.

In an interview with CBS News’ Jonathan Vigliotti, Remy spoke about what prompted him to make the video. “I’ve actually called about 11 different families to let them know in the middle of the night that their loved one had unfortunately succumbed to COVID disease,” Remy said. “It’s one of the worst phone calls you could ever make.”

“This is something I don’t want for anyone,” he continued.

In a statement to CBS News, BJC HealthCare, the parent company of the two hospitals at which Remy works, explained the approaches they’ve taken as COVID-19 continues to surge across the country, particularly in the Midwest. “As COVID-19 cases continue their dramatic climb in our region, it is essential we take additional steps to prepare our hospitals and assist our caregivers in delivering the best care possible for our patients and their families,” the company said.

BJC HealthCare suspended some elective surgeries at all of its 15 hospitals, according to the statement.

According to Reuters, which interviewed more than a dozen medical care providers and public health officials in the nation’s heartland, many hospitals in the Midwest are overwhelmed. Health care professions reported a severe lack of beds, equipment and staff, according to Reuters.

Most hospitals in the Midwest have tried to increase availability, according to Reuters. Hospitals are repurposing wings, putting multiple patients in one room, and asking staff to work longer and more frequently.

In Kansas, just 35% of ICU beds are available, according to the state’s Department of Health and Environment. Stormont Vail Hospital in Topeka is now filled to capacity with more than 100 coronavirus patients, Vigliotti reported. “What is worrying to me is two weeks from now, Thanksgiving, and having a lot of cases that will end up coming to us… and there [are] no beds,” Dr. Hassan Taha of Stormont Vail told Vigliotti.

As the daily case counts, hospitalizations and deaths surge in several regions, Health and Human Services Secretary Alex Azar announced hopeful news about Pfizer’s vaccine. Distribution of the coronavirus vaccine could begin “soon after” a Food and Drug Administration panel meets on December 10 to consider Pfizer’s application for an emergency use authorization, Azar said Tuesday. Moderna and AstraZeneca have also shown promising results in vaccine trials.