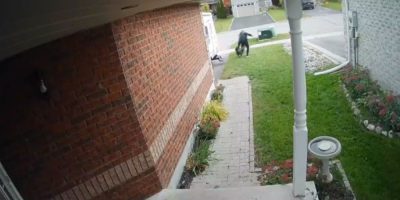 A man seen in a video pulling on a dog attacking a Barrie woman in front of her home is not the owner.

Kyle Fram tells Barrie 360 that the owner was away at the time and the dog was being looked after by a roommate. Fram says the way the law is written, according to bylaw officers, the roommate is considered the owner because the dog was in his care at the time.

He says the dog is at a rescue centre where it originally came from in Owen Sound for a 10-day rabies quarantine, and it was dropped off by the owner.

Fram says he has found out the dog is a Staffordshire Bull Terrier.

“It’s a family of the pitbull, which is banned, apparently.”

He says the immunization records for the dog were not up-to-date.

Fram’s 40-year-old wife Cory was attacked by a dog in front of her Cunningham Drive home last Thursday. She suffered serious injuries to her backside, arm and hand.

The couple’s home doorbell camera captured some of the attack.

Cory told Barrie 360 last week that the dog was running up the street when it latched onto her arm.

“She has lost sensation in her forearm, and we actually discovered some other injuries to her body that were not discovered before because the hospital did not strip her down to check, but she actually has bites on her left side,” says Fram. “Her hand is almost not really useful at all and there might be some tendon damage to it.”

There is also the mental side, says Fram, and he adds from that standpoint his wife is not doing well.

Since bylaw officers did not witness the attack, he says authorities have told the couple it will be up to them to press charges. He doesn’t know what charges bylaw officials are “granting,” but the couple wants to talk more with City of Barrie enforcement services.