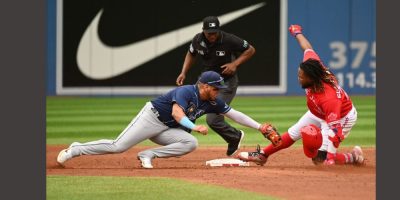 Lourdes Gurriel Jr. had a solo home run in the seventh inning for Toronto (44-33) and George Springer batted two runs in with a single in the sixth.

Designated hitter Harold Ramirez had an RBI double as Tampa Bay (40-36) dropped its fourth game in a row.

Tampa Bay opened the scoring in the second inning when catcher René Pinto grounded out to third, but gave Ramirez enough time to score.

Bichette, Guerrero and Kirk broke the game open for Toronto with three consecutive RBI doubles in the third inning.

Bichette came to the plate with the bases loaded and banged a double off the right-field wall to score Gurriel and Cavan Biggio.

On the next pitch, Guerrero doubled down the left-field line to bring in Springer and Bichette.

That brought Kirk up to the plate with the sold-out crowd of 44,445 chanting “M-V-P” for the top vote-getter among American League catchers in all-star balloting.

His hit also went down the left-field line to cash in Guerrero for a 5-1 lead.

Ramirez chipped away at Toronto’s lead in the fifth, doubling to deep left-centre field to give Kevin Kiermaier enough time to score from first base.

Springer tacked on more runs for the Blue Jays in the sixth inning when his hit eluded Rays third baseman Yandy Diaz and dropped for a single. That scored Gurriel and Santiago Espinal for a 7-2 lead.

Guerrero’s groundout then brought home Biggio from third for the Toronto first baseman’s third RBI of the game.

Gurriel came to the plate in the eighth inning with two outs and no one on.

Although thousands of fans had already left Rogers Centre with the game well in hand, the remaining crowd sang an impromptu version of “O Canada” in the top of the ninth as Castillo closed out the game.

O CANADA! — Rogers Centre was decked out in red and white to celebrate Canada Day, with bunting hanging from the second deck in centre field and all scoreboards in national colours. The first 15,000 fans who attended the game were given free red Blue Jays jerseys with Springer’s name on the back. The team said all of the jerseys were handed out within 30 minutes of the stadium’s gates opening two hours before the game.

MARTIN HONOURED — Former Blue Jays catcher Russell Martin threw out the opening pitch. Born in Toronto and raised in Montreal, Martin earned four all-star appearances over his 14 years in Major League Baseball. He played four seasons with the Blue Jays, including the team’s post-season runs in 2015 and 2016.

UP NEXT — Kevin Gausman (6-6) will take the mound for Toronto in the first game of the Blue Jays doubleheader with Tampa Bay on Saturday afternoon. Shane McClanahan will get the start for the Rays. Neither team has announced a starter for the second game.

This report by The Canadian Press was first published July 1, 2022.