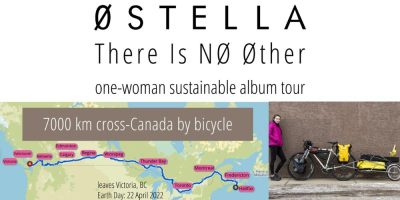 The Downtown Barrie BIA is thrilled to announce 0Stella (oh stella) to Meridian Place who will perform on Wednesday, August 17th, prior to the regular Lawnchair Luminata outdoor movie screening, from 7:30 p.m. – 8:15 p.m.

Tired of sitting at home for the last two years, 0Stella is reinventing the wheel for what it means to be a touring musician while still remaining sustainably minded.

True to her name (the 0 stands for zero waste), 0Stella began her one-woman coast-to-coast tour of Canada on 22nd April (Earth Day) by loading her bicycle with a guitar, tent and solar panel.

Despite being broken-hearted by the division within the country she was so excited to emigrate to, this Irish-Canadian is set on reuniting communities in a manner that feels safe for everyone.

The staggering 6,940 km tour started in Victoria, BC and concludes in Halifax, NS.

The pop-up tour is built around 15-minute patio shows at venues as well as curbside concerts, block parties and house concerts. The impetus for this tour came with 0Stella’s acceptance to an artist residency in France, which is currently postponed to a later date.

Having started 2022 dancing our feet off to ‘Glitter On The Dancefloor’, the first single from her upcoming album, Freefall, 0Stella continues to shake things up. Freefall is the first of two mini albums that combine to make one whole LP entitled Pendulum State, due for release in 2023 on Dead Doll Records. Each mini-album will be released single by single every month.

A year-long long-distance project with producer Devon Lougheed (Skye Wallace and Altered By Mom), 0Stella says the record was a product of working through her own struggles with mental health and addiction.

The first media announcement of 0Stella’s ‘There Is N0 0ther’ tour was on CBC Edmonton News and Radio Active on March 2nd. Subsequent interviews on major outlets include CBC Edmonton News (June/27) and CBC Saskatchewan (July/17).

A map of the proposed route (subject to change) can be found at 0Stella.com and an album pre-order has been launched.

To schedule an interview with the artist or reserve the right to exclusive access to tour updates in your region, please contact Dead Doll Records through thereisn00thertour@gmail.com. (note the two zeros in the email address).

For more information on the Downtown Barrie BIA, visit downtownbarrie.ca