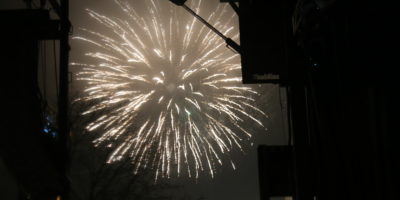 The City of Barrie was unable to provide its traditional fireworks display over Kempenfelt Bay this Canada Day, but its residents seemed to make up for it.

Dozens of private fireworks displays could be spotted across the city on the evening of July 1, many going off around the same time, right around the 9:45 mark.

Despite the numerous fireworks displays spotted across the city, there wasn’t a huge increase in calls to city services. ” Since June 30, the City received six complaints related to the setting off of fireworks,” said Tammy Banting, the City of Barrie’s Manager of Enforcement Services. “The complaints had to do with the fireworks being set off too close to neighbouring properties or in parks. Most of the complaints were addressed with by-law education and the residents complied, no charges were given out.”

Barrie Police Service spokesperson Peter Leon says there were just over a dozen calls to the service that evening, and most were out of concern for the surrounding area. “Concerns primarily were due to the dry conditions,” Leon told Barrie 360. “We did follow up on them but I’m not aware charges that were laid.”

“We did have about 15 calls in respect to by-law matters, and that includes noise complaints from backyard parties and what-not,” he added.