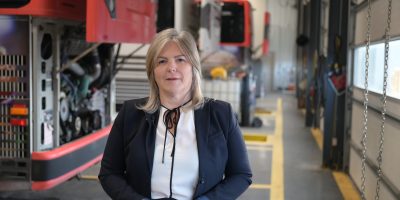 Imagine spending decades of your life building a business that is wildly successful to then suddenly realize the industry you’re in is teetering on the edge of a full-blown crisis.

Then imagine you came to this realization during a global pandemic that forced your booming business to pump the brakes.

Those were some discerning moments for Barrie Entrepreneur Angie Ricci.

Ricci owns Angel Tours and Entertainment in Barrie and the GTA.

Before Covid-19 appeared, Ricci saw her business booming and work had already begun on a new digital program that would address the serious workforce issues plaguing her business.

“We had the big contract up at Casino Rama … we were close to a 24-hour operation before this all happened,” said Ricci. “It’s pretty quiet in here now, but before the pandemic …. this place was a hub of activity.”

Ricci was quietly working on this new platform behind the scenes when the pandemic began. The idea was to create something to help address a serious worker shortage.

While she worked away on the app, the tourism industry shut down and her bussing business was shuttered, so Ricci dove all in on this new idea and quickly realized it had more legs than first thought.

Fast forward a year and Ricci is about to launch Driver DX, with the gigantic task of revolutionizing the global transportation industry.

So yes, this story is about pivoting, yes it’s about facing adversity and overcoming it, but Ricci’s message also carries a very pressing warning about what’s to come.

“The reality is that we have not replenished the workforce that has left and that is about to leave, and worsened now by the pandemic,” Ricci said.

“Inflation is going up and products are going to be more scarce to get, not because they’re not being made, but because we can’t deliver them.”

Enter Driver DX, the two-sided marketplace for professional truck, bus, and van drivers and the company’s that need them.

Ricci says the app and digital platform will connect professional drivers and carriers to each other.

Businesses seeking drivers log onto the Driver DX system and select criteria that would best match their needs.

Those drivers, who’ve been onboarded into the Driver DX system, would then receive app notifications and can accept or decline the gig.

Ricci hopes this new service will help address what she says is a longstanding driver shortage in the industry that’s already bad, and “only going to get worse.”

“I don’t want to be the bearer of bad news but it’s a reality and we’re [Driver DX] on the forefront of creating and redefining the new transportation industry and what that could look like and we have a great piece of software that will help,” added Ricci.

You can find out more at the Driver DX website, which includes a running tally of the current driver shortage crisis.

The ongoing truck driver shortage is now estimated at 80,000, a figure Ricci says is low. She pegs the true number around 100,000.