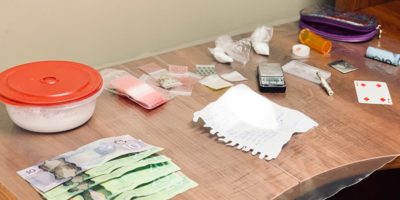 An eagle-eyed South Simcoe Police officer is credited with a drug bust in Innisfil.

Around 1:30 Thursday afternoon, the officer spied a vehicle missing a front licence plate, on Innisfil Beach Rd. in Alcona. The vehicle was stopped and the driver was spoken to. That led to a roadside drug screening test. Police say the test resulted in a positive for cocaine and THC. Police add drug paraphernalia was spotted in the vehicle.

Following a search of the car, investigators say cocaine, meth, pot, and cash were seized. A 22-year-old Innisfil woman is facing trafficking and possession charges.

Meanwhile, South Simcoe Police executed a search warrant at a home in Bradford just before midnight yesterday. A quantity of crystal meth was seized. Two people are facing charges.