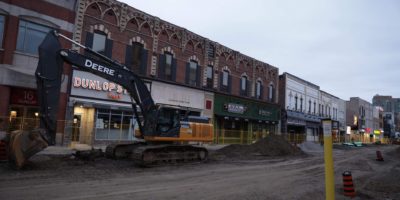 The city confirmed in a tweet late Friday afternoon that the Dunlop Streetscape project is complete.

Yes, there is a hiccup or two that will prevent traffic from immediately moving through the core. An unforeseen issue with the utility connection means the intersections at Five Points and at Toronto Street will remain closed until the power is connected and the traffic signals are activated. The work is expected to be done next week.

Either way, small potatoes for store and restaurant owners who have endured not only off-and-on road closures since the project began in Aug. 2019, but also the monster known as COVID-19.

Kelly McKenna, Downtown Barrie Business Association (BIA) executive director, says it has been a massive struggle. She said there is a positivity in the air, and McKenna heard it firsthand on Friday.

“Everyone down here is feeling we’re at the tail end of it and things are going to get better. There’s light at the end of the tunnel. We’re through the worst of it, and we can’t wait for spring.”

McKenna is thrilled traffic will be flowing through the downtown a few weeks before Christmas. With more traffic, she says there will be more people.

While this has been a difficult journey, McKenna praised the team effort of the BIA and the City of Barrie for organizing Open Air Dunlop over four Saturdays in September, and added an extra Saturday in early November because of unexpected mild weather. McKenna said the event was a little bit of sunshine that brought people to the core.

“The shops were busy and sales were up. People were telling us they had the best sales days pre-COVID,” said McKenna. “Open Air Dunlop really helped to energize the downtown and really helped the vendors and our retailers here.”

She said there is a real push to shop local ahead of Christmas. McKenna reminds everyone that businesses downtown are owner-operated. The support retailers and restaurants have received from the public during the construction and pandemic has not gone unnoticed. She said everyone is grateful people are choosing to shop local.

Some clean-up of the remaining work will take place next spring. This is not expected to impact traffic or cause major disruptions.