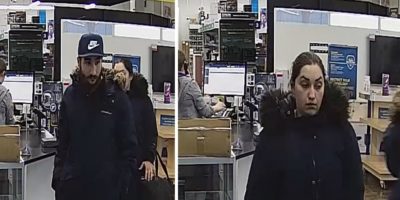 Police are on the hunt for two suspects after a five-finger discount was taken at a south Barrie computer shop.

Barrie Police say the theft happened in early January but was just discovered Saturday. A review of store security cameras shows a man and woman enter the store before stealing a wireless router. The man allegedly took it out of the box and placed it on the ground, while the woman came by after to pick up the device, concealing it in a large black bag she brought. The two then left the store without making any attempt to pay.

If you can help identify either of these two individuals, please contact Constable Matte of the Barrie Police Service at 705-725-7025 ext. 2557 or pmatte@barriepolice.ca. Any information can be provided anonymously to Crime Stoppers at 1-800-222-TIPS or leave an anonymous tip online at www.p3tips.com.