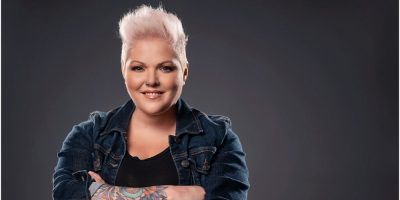 Amy Aust of 107.5 Kool FM is set to take the stage at Dancing with Easter Seals Stars, and also on the line is some ink.

The event is hosted by Easter Seals and will take place on Thursday, April 21, at Liberty North in Barrie.

The contestants have been promoting the event, and are collecting donations (the goal for each celebrity is set at $3,500) that will go towards Easter Seals programs and services to help kids with physical disabilities.

An internal twist has been added to the competition, as a wager is set between Aust and Barrie City Councillor, and fellow contestant, Natalie Harris.

Aust says whoever raises the least amount of money will have to get the other person’s name tattooed on their body.

“I love Natalie very much,” Aust told Barrie 360. “But I think she would probably say the same, we don’t want each other’s names on our bodies.”

The Afternoon Drive Host for Kool FM isn’t unfamiliar with the event, as she was a guest of Dancing with the Stars for a couple of years.

“They were looking for volunteers and I thought, ‘What a great way to get back out and doing things,'” said Aust. “It’s been so long since anybody’s done anything.”

When asked what she’ll take away from this experience, Aust said trying something out of her comfort zone, pushing herself, and benefitting somebody.

The funds raised will help purchase mobility equipment like a van, a lift, bath chairs, or it could even send a kid to camp, all of which Aust says is incredibly important.

“There’s a lot of kids in our community who have mobility issues,” said Aust. “Kids with disabilities, not as independent as they possibly could be…it’s for a great cause, Easter Seals does amazing work in the community.”

Every $20 raised will count as one vote towards Aust’s score at the event.

Head here to vote, and here to donate, for Amy!