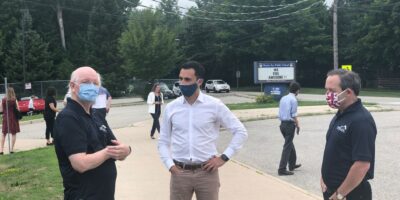 Thousands of parents have signed a petition urging the Ontario government to reduce class sizes for elementary students when the bell rings in September. Based on what Education Minister Stephen Lecce said during a visit to Shanty Bay on Tuesday afternoon, the province is sticking to its guns and class sizes will remain as they were before the pandemic.

Lecce was in the Barrie-area to formally announce the government was going to build a new elementary school in Shanty Bay to replace the one that was built in the late 1950s.

Pressed to respond to concerns of parents of elementary school children, Lecce said the province was ensuring parents have a choice.

“Parents can choose in-class instruction — five days a week for elementary students — or remote learning. That is their choice.”

The Minister also said the government had based its decisions on the advice of health experts.

“Keep in mind, in elementary, based on advice that was given to use from a variety of Canada’s leading paediatric health experts, the risk is higher among students in high school versus elementary in the context of transmission. That’s the emerging evidence we have.”

As a result, there is adjustment at the high school level, but only for secondary students in 24 “designated boards”–mostly in urban areas with higher student enrolment-they will attend classes on alternating days with cohorts of 15.

In non-designated boards, including the public and catholic in Simcoe County, where there is usually fewer students, classes will be full-time.

“We have put aside $30 million to hire additional staff to ensure distancing can be achieved. Boards of education, where the risk is emerging in some of those communities with higher level of transmission, can apply to seek those dollars to get more staffing, more teachers and more educational assistants in place to ensure more distancing can be achieved.” noted Lecce.

He also said it was important for kids to return to school.

“The one consensus that exists in the medical community is these kids have to go back for their own wellness, mental health and development.”

He said money won’t be an obstacle to keeping kids safe.

“We have put $309 million more in place with strict public health policies to keep these kids safe by introducing more screening, more testing, and more cleaning of their facilities.”

Lecce said he wanted parents to know that the government will be with them every step of the way and that money was not an obstacle.

“If the risk continues to rise, we will continue to make those investments. We will not compromise the safety of children in this province.”