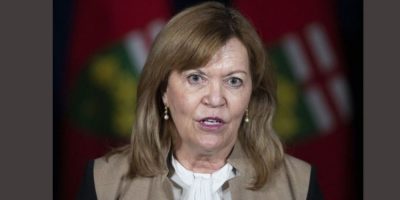 Ontario Health Minister Christine Elliott announced Friday she will not seek re-election after “considerable reflection,” a decision that will come as a blow to the Progressive Conservative government’s re-election efforts.

Elliott, who has steered the province’s response to the COVID-19 pandemic, will stay on as health minister and deputy premier until the campaign begins for the June 2 election.

“After considerable reflection and discussion with my family, it is with deep gratitude for my 16 years in public life that I recently shared with Premier Ford I will not be seeking re-election in the upcoming provincial contest in June,” Elliott said in a written statement.

“I am truly thankful for the journey I have taken in public life and am looking forward to what the next chapter will bring.”

Premier Doug Ford said Elliott is not only a trusted colleague, she is also a close, personal friend as their families have been connected for decades. Elliott’s late husband, Jim Flaherty, served alongside Ford’s father in the Ontario legislature.

“Christine has been by my side since the start of the pandemic,” Ford said in a written statement.

“She remains instrumental in helping steer Ontario through one of the most difficult periods in our province’s history, especially now as we continue to protect our hard-fought progress and ease public health measures. I will continue to rely on her advice and counsel.”

Elliott’s announcement comes not long after another senior member of Ford’s cabinet, Rod Phillips, not only said that he would not run in the election but also resigned last month.

Elliott was first elected to the legislature in 2006, but left politics for three years after losing the 2015 Progressive Conservative leadership race – one of her three attempts to helm the party.

This report by The Canadian Press was first published March 4, 2022.

Banner image: Christine Elliott, Deputy Premier and Minister of Health, speaks regarding the easing of restrictions during the COVID-19 pandemic in Toronto on Thursday, January 20, 2022. THE CANADIAN PRESS/Nathan Denette