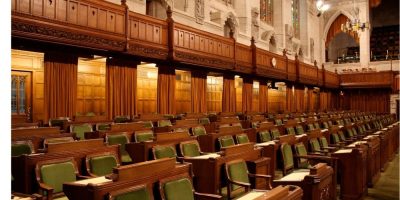 The House of Commons has passed a motion to approve the extraordinary and temporary measures in the Emergencies Act, which Prime Minister Justin Trudeau invoked last week in a bid to end blockades in Ottawa and at several border crossings.

The motion to confirm the declaration of emergency passed 185-151, with the New Democrats voting in favour alongside the minority Liberal government.

New Democrat Leader Jagmeet Singh said earlier Monday his party would support the motion, but withdraw that support as soon as it decides the measures are no longer necessary, including if remaining convoy members stopped lingering in Ottawa and near border crossings.

The Conservatives and the Bloc Québécois opposed it.

The vote to approve the measures will keep them in place until mid-March at the latest and the Senate must also vote on the government’s request. At any point, the Senate, House or government could pull support and the extraordinary powers stemming from the emergencies law would be torn up.

Leading up to the vote, there were signs the government had decided to make it a confidence vote, meaning that if it failed, the minority Liberal government could have fallen, which would have triggered an election.

Trudeau had not officially designated the vote as such, but he opened the door to that interpretation by likening the decision to that on the throne speech, which lays out the government’s agenda.

“I can’t imagine that anyone who votes ‘no’ tonight is doing anything other than indicating that they don’t trust the government to make incredibly momentous and important decisions at a very difficult time,” he said at a news conference.

Just before the voting began around 8 p.m. eastern time Monday, government House leader Mark Holland was asked to clarify whether this was a confidence vote.

Singh said his party had always seen the vote as a confidence matter.

Toronto Liberal MP Nathaniel Erskine-Smith said he might have voted against continuing to use the act now that the blockades ended, but would vote yes because he had no interest in helping trigger an election. He voted in favour Monday night.

Joël Lightbound, a Liberal MP who has criticized the government over its handling of the crisis, said invoking the act was “a slippery slope.” He said he was inclined to vote against the measures if it was not a vote of confidence, but asked for clarification from ministers. He also voted in favour of the motion Monday night.

Without any clear indication from Trudeau’s office or caucus whips, the Official Opposition criticized the prime minister for what B.C. MP Todd Doherty styled a “veiled threat” of an election because his leadership was “threatened” and “fragile,” while Ontario’s Alex Ruff said Trudeau would rather have an election than admit he had got something wrong.

Bloc Québécois Leader Yves-François Blanchet said Trudeau seemed to have made the matter a vote of confidence because he was afraid of his own caucus. Bloc MP Martin Champoux questioned the validity of the vote and accused Trudeau of “twisting the arm” of people who might otherwise disagree.

After a weekend of fractious debate while police cleared protesters by Parliament Hill, the final hours Monday were peppered with barbs at Trudeau and even Singh for giving the prime minister the backing he needed.

“When did the NDP lose their way?” B.C. Conservative Dan Albas asked, arguing that the use of the Emergencies Act “would further divide Canadians.” Warren Steinley, a Saskatchewan Conservative, asked Trudeau how he convinced “the federal NDP to sell out the core beliefs of Jack Layton and Tommy Douglas,” referencing two key, former leaders of the New Democrats.

Ontario Conservative MP Dave Epp, accused the prime minister of using “the politics of division rather than co-operation and understanding,” using words Trudeau has used in the past.

Emergency Preparedness Minister Bill Blair said the Conservative, by opposing the measures, had “abandoned all pretext of supporting law and order,” and Public Safety Minister Marco Mendicino said the measures were “very proportional, measured and respectful of the charter” and not here to stay.

“We will absolutely retreat from the Emergencies Act as soon as we can,” Mendicino said.

Manitoba Conservative MP Larry Maguire said the “powers are too sweeping” and the “precedent too dangerous” to justify the act’s use.

The Emergencies Act should be “a measure of last resort” when there are no alternatives remaining and the “onus” was on the government to prove that existing laws were insufficient. He said Trudeau had failed to do so.

Edmonton MP Ziad Aboultaif said using the act was overkill to stop what amounted to some illegally parked vehicles.

Liberal Peter Schiefke criticized “frequent, unabated displays of hatred” during the protests including swastikas and “signs proudly stating pureblood.” He said U.S. financial backing for the protests had some links to supporters of the Jan. 6, 2021 storming of the Capitol in Washington, D.C.

Trudeau said a week ago he was invoking the act for the first time since it passed in 1988 because police needed extra help to end blockades that had been ongoing in downtown Ottawa for weeks.

Regulations under the act granted powers to make tow trucks into essential services, require banks to freeze accounts of people participating directly or indirectly in the protest, and designate no-go zones for public gatherings, including Parliament Hill.

Singh said Monday the act was needed because all three levels of government had failed to take the threat posed by the convoy seriously until it was too late.

“Our support from the beginning has always been reluctant,” he said. “We were reluctant because it should have never got to this point.”

“The NDP Caucus in 1970 under Tommy Douglas took a courageous and principled stand against the War Measures Act. Today’s NDP under Jagmeet Singh betrays the legacy and supports Liberals on the Emergencies Act,” the former Burnaby MP tweeted.

When asked if he was breaking from Douglas, Singh said the Emergencies Act is not the same as the War Measures Act as the former has parliamentary oversight and limitations on its powers.

This report by The Canadian Press was first published Feb. 21, 2022.