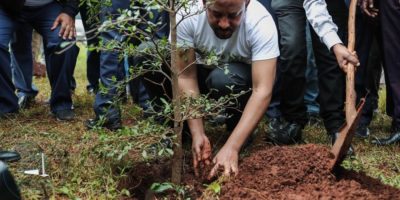 Ethiopians planted more than 350,000 trees in just 12 hours on Monday, the country’s minister of innovation and technology announced on Twitter. The mass-tree planting not only helps the environment, it sets a world record, the Associated Press reported.

Prime Minister Abiy Ahmed created the initiative to help restore Ethiopia’s landscape, which experts say is being eroded by deforestation and climate change, the AP reported.

The country’s goal was to plant 200 million trees in one day. But Getahun Mekuria, Ethiopia’s Minister of Innovation and Technology, later announced that 353,633,660 trees were planted.

Prime Minister Abiy Ahmed, who took part in the tree planting festivities, congratulated those involved for surpassing the initial goal.

Ethiopia has a larger goal of planting 4 billion trees between May and October 2019. So far, more than 2.6 billion trees have been planted in almost all parts of the country, the AP reported.

Currently, less than 4 percent of the country’s land is forested — a sharp decline from about 30% at the end of the 19th century, according to Farm Africa, which is involved in Ethiopia’s forest management.

India set a tree planting record in 2017, adding 66 million trees to the country. Ethiopians, with help from various international organizations and the business community are hoping to surpass that world record.

It unclear if the Guinness World Records is monitoring the nation’s efforts, but the prime minister’s office said that specially developed software is helping with the count, according to the AP.

According to a recent study published in Science magazine, planting billions of trees around the world would be the cheapest and most effective way to tackle the climate crisis. Since trees absorb carbon dioxide, which contributes to global warming, a worldwide planting initiative could remove a substantial portion of heat-trapping emissions from the atmosphere.