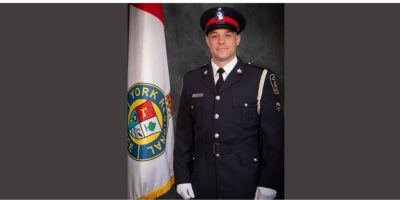 By Tyler Griffin in Markham, Ont.

A York Region police officer killed in a car crash was remembered Thursday as a family man with a positive outlook, a great sense of humour and a lifelong commitment to serving communities.

Uniformed officers from across the Greater Toronto Area gathered to pay their respects at a funeral for Const. Travis Gillespie, who died while driving to work last week. A 23-year-old man has been charged with impaired operation causing death in the crash.

Gillespie’s partner, Melinda LaPorte, spoke of their 26 years together “being best friends, not realizing that your soulmate was there the whole time.”

“He was my partner in life and all over the best person I had ever known. He was the perfect part of me,” she said, dabbing tears with a tissue.

In his last days, LaPorte said Gillespie, 38, spent time with his nieces and nephews, went on runs with his brothers and spent time with his parents building shelves and helping with chores. She reminisced on his plans to build a halfpipe in their backyard so he could teach her how to snowboard.

“We spent most of our days walking trails with the pups, singing and dancing in the kitchen … having big bonfires, when mosquitoes got so bad that he insisted we rush down to the lake down the road for a dip in the middle of the night,” she said. “He would say over and over to me, ‘Melinda, I am so happy.'”

“Even now, with him gone, it will never die,” Gillespie’s youngest brother, Scott, said in an audio clip played through his phone, as he was unable to speak.

Those who worked with Gillespie remembered him as an accomplished co-worker with a humorous side.

“You would hear stories of this mythical figure … of his prowess as an officer, of his legendary partying, of his whirlwind of positivity and hijinks,” said Michael Walton, Gillespie’s former colleague at Metrolinx, where Gillespie worked as a transit officer for 11 years before joining the police force.

“He was truly larger than life … there’s not an officer of Metrolinx that doesn’t have multiple stories of where Gillespie picked them up when they were down, helped them become a better officer.”

Walton spoke of Gillespie’s “massive fraternity” of friends who loved him and his passion for mixed martial arts. The officer’s family established a scholarship fund that will be awarded to a child practising martial arts each year in his honour.

Between tributes, pop-punk songs selected by Gillespie’s family filled the room. Photos of him sporting a smile in his uniform at work, being drawn on by his nieces and playing various sports lit up screens at the venue.

Speaking at the funeral, Ontario Premier Doug Ford said “this has been a terrible week for everyone within the first responders families.” On Wednesday, Ford spoke at the funeral for Toronto police Const. Andrew Hong, who was shot dead at a coffee shop in Mississauga, Ont., last week in what’s been called an ambush attack.

Ford said he didn’t know Gillespie personally but spoke with a neighbour who had known the officer since he was a little boy.

“He was a wonderful, fun, loving man, a huge help to older folks in the community, washing windows up high on a steep roof that only a cat could reach,” the premier said.

York Regional Police Chief Jim MacSween said the force is fortunate to have had Gillespie as a member for the past two and a half years.

MacSween said the many members of Gillespie’s platoon in attendance illustrated “how much they valued and respected Travis, and how much they, too, are grieving his loss.”

Following the service, hundreds of officers lined up silently beside one another as Gillespie’s coffin, draped with a Canadian flag, was brought out of the Markham, Ont., funeral home to be taken to Cramahe Township, where Gillespie was raised, for a private interment.