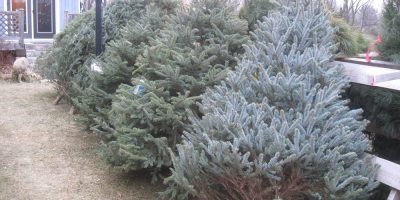 Don’t expect an immediate fix to Canada’s Christmas tree shortage, according to Doug Drysdale, the owner of Drysdale’s Tree Farm in Essa Township.

“From an industry standpoint, there is a shortage of trees, and there will be for another five or six years,” he says. “That’s because trees take eight to 10 years to grow and aren’t something that can be replenished in one year.”

Drysdale says the problem began in the 2008 recession up until about 2014 as people got out of the tree business and stopped planting trees.

“We’re now seeing the effects of that,” he adds.

Drysdale says in the 70s, 80s and 90s, the Midland, Penetanguishene and Lafontaine area supplied about 200,000 Christmas trees a year to the Ontario market, and now it is about 10,000.

“When you look at how the population has expanded and things have changed, it’s the perfect example of supply and demand, and the supply right now is low and will continue to be low.”

Drysdale points out that the tree shortage isn’t the main reason the public is paying more for a Christmas tree.

“Gas, taxes, labour and the like, everything has gone up, and Christmas trees are no different from any other product,” he says. “If all things being equal and supply was able to keep up with demand, prices would still go up because of the added costs that everybody is paying.”

However, unlike food staples, Drysdale says Christmas trees are a once-a-year purchase.

Drysdale’s Tree Farm is 400 acres and there is no harvesting off the farm.

“We’re planting here all the time, so we have an endless supply of trees at the farm for the consumer to come and get a tree.”

“Even if you had 100,000 more trees, I could probably sell them in a week because that is how strong the demand is.”

At least three times in his life, Drysdale has seen a situation where Christmas trees are in short supply.

“Right now it’s going to take a bit longer for the supply to catch up, and in fact, it might never catch up because demand seems to be growing faster than supply.”