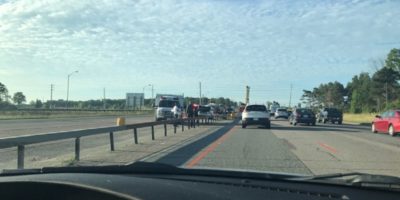 The OPP say one person is dead following an incident involving a pedestrian on the 400 through Barrie. Foul play is not suspected.

The northbound lanes of the highway were closed north of Mapleview for several hours during the Tuesday morning rush, with traffic being diverted through the ONroute rest stop to mitigate backups.

The name and age of the victim have not been released.