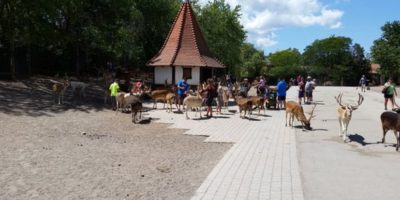 Marineland in Niagara Falls say they were “deeply disturbed” after a father and son allegedly caused a stampede at the park that resulted in the death of two deer.

Marineland issued the statement over the Victoria Day long weekend saying their staff were “deeply disturbed by lengths activists went to disrupt opening day and to stop our evolution.” The amusement park and zoo shut down one of its land animal attractions after the incident.

Marineland say the individuals laughed in the face of staff as they tried to get them to stop causing the disturbance.

Statement: We were deeply disturbed by a shocking incident that occurred at Marineland’s Deer Park at the hands of two individuals who claimed to be a father and son.

We are very sad to report that these individuals repeatedly attempted to, and were ultimately successful in causing a stampede of deer and laughed in the face of staff as they tried to get them to stop. They refused all instruction by staff, and resisted efforts to remove them from the Deer Park.

As we were focused on calming and saving our animals from harming themselves, the individuals in question slipped away from the Deer Park.

We are very sad to report two deer lost their lives in this incident. This has never happened before and our guests have always, as a general rule, behaved responsibly in the Deer Park. We are all upset by this terrible act against innocent animals. In order to protect our animals, we are closing the Deer Park to make modifications to prevent this type of incident from ever happening again.

According to Marineland, they claim the pair took off when staff tried to calm the animals after the man and his son allegedly caused a stampede at the park on its opening day on Saturday.