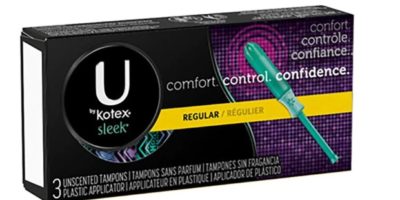 American corporation Kimberly-Clark has recalled some shipments of certain tampons, after reports that some have broken apart and left pieces inside users’ bodies.

We announced today a voluntary recall of U by Kotex® Sleek® Tampons, Regular Absorbency sold in the U.S. & Canada for a quality-related defect that could impact the product performance. For info, please read our FAQs: https://t.co/pfxDrBNqdh or contact us: https://t.co/yrTD0FyV37

In a news release posted online Tuesday, the Wisconsin-based company announced that specific shipments of U by Kotex Sleek Tampons with regular absorbency were being recalled. The tampons were distributed to stores across North America over the last two years, manufactured between Oct. 7, 2016, and Oct. 16, 2018 and distributed between Oct. 17, 2016, and Oct. 23, 2018.

Tampons affected by the recall include those sold in 18, 34 and 3-count packages.

Anyone with the affected product at home should check to see if the lot code listed on the box correlates with those listed on Kotex’s website. If so, the company says customers should immediately stop using the product and contact their customer service team.

Once news of the recall broke, social media was flooded with stories of Kotex products coming part or unraveling.

This happened to me a few yrs ago by this exact brand and it’s crazy to think that they really didn’t do anything to fix it @ubykotex https://t.co/KOXU7TrhkZ

This happened to me last month and it was scary AF – glad @ubykotex is issuing a recall https://t.co/HxN6otFNEO

I had that happened. Thought that yanked too hard on string. Geez🤦‍♀️

Kimberley-Clark said they also received “a small number of reports” of infections, vaginal irritation, localized vaginal injury and other symptoms.

No other Kotex products are affected by this recall at this time, despite reports of this happening with other products

@ubykotex I have reasons to believe there is more of a recall than you think with UKotex clicks. My lot # wasn’t included in the recall but I had the same issue with mine as what’s happening with the most recent recall for that brand. I’ve tried to contact but haven’t had luck.

Canadians with complaints about the tampons can make them directly to Health Canada using an online form.