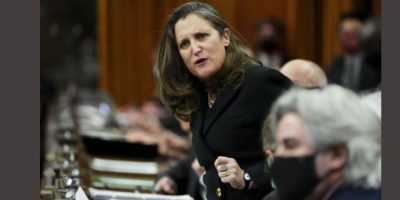 She nonetheless wrapped the budget in copious amounts of yellow caution tape, warning of the economic uncertainty posed by Russia’s invasion of Ukraine and inflation rates at three-decade highs.

But with investments in NDP priorities — housing, dental care and a tax on excess bank profits all making the cut — the budget will pass the first test of the NDP-Liberal confidence and supply deal reached last month.

He said the NDP caucus will vote for the budget, which means the Liberal minority government will survive the confidence vote.

This budget began its life with a growth agenda, Freeland said in her speech to the House of Commons Thursday, and that remains its focus.

And while she insists the “convoys of Russian tanks rolling across Ukraine” did not push the Liberal government off that goal, the war still made itself known in the pages of the budget.

A boost of more than $8 billion for defence is among the biggest new pledges and was not in the cards before the Feb. 24 invasion shattered complacency about the military and Canada’s role in NATO.

“We know that freedom does not come for free, and that peace is guaranteed only by our readiness to fight for it,” Freeland said in her speech.

She was clear the budget is winding down pandemic-related spending that headlined the last two years and led to unprecedented deficits.

She defended the aid programs that helped families and businesses stay afloat during lockdowns as the reason Canada’s economy has recovered, but she said that kind of spending cannot go on forever.

“The time for extraordinary COVID support is over,” she said.

The Liberals were heavily criticized last December for failing to do enough in the fall economic and fiscal update to acknowledge and address rising inflation.

The problem has become much worse in the months since.

Interim Conservative leader Candice Bergen said the Liberals did nothing to make life easier for Canadians. Instead she said they are using billions in extra revenue earned because of inflation, higher oil prices and better than expected economic growth, to secure the votes of the NDP.

“I’m very concerned that with their increased spending everything will continue to go up,” she said. “It’s not a good budget. It’s an irresponsible budget. Conservatives will not be supporting it.”

Federal program spending falls to $425.4 billion in the new fiscal year with a deficit of $52.8 billion, which are the lowest since before the pandemic but still significantly above pre-pandemic levels. Total spending in this budget, including debt servicing, is $452.3 billion.

Freeland projects revenues will grow to close to half a trillion dollars in five years, and the deficit will fall each year until it hits $8.4 billion in 2026-27.

There is a heavy emphasis on transitioning to the green economy, with new investments in critical minerals and metals, expanding the availability of zero-emission vehicles and charging stations.

Freeland said the budget is an attempt to power-up Canada’s productivity and innovation, which she calls “the Achilles heel of the Canadian economy.”

Canadians are highly educated and full of good ideas but turning that into tangible products and services has been a longtime problem in this country, she said.

The budget is promising to create an innovation and investment agency with an initial $1 billion investment to help Canadian companies access capital needed to grow and get products onto the market.